Sajid Nadiadwala is a producer who believed in making larger than life commercial moviesand then suddenly, he switched teams. His brand of cinema no longer associated with masala movies alone and so, we took our time to accept that Highway, Tamasha and even Chhichhore were backed by him. Here are seven such instances that left us baffled by his choices! 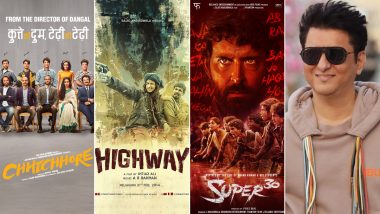 People from the 90s are aware that Sajid Nadiadwala has a type. Before you get dirty ideas, we are talking about his taste in cinema. He built his production venture on mass entertainers from Waqt Humara Hai, Andolan, Jeet to Kambakkht Ishq and more. He is a producer who believed in making larger than life movies, commercial masala movies that take you away from your mundane for a few years. But then suddenly Nadiadwala brand of cinema no longer associated with large than life movies alone. He found a way to back content while also hyping potboilers that get the moolah home. Sajid Nadiadwala Birthday Special: 10 Blockbusters Of The Filmmaker That're Everyone's Favourites.

In an interview to PTI, Sajid Nadiadwala had said, "We were discussing this film (Chhichhore) before Dangal. He had narrated the idea to me earlier but he felt I would not like to make it as it is a small film. When Imtiaz Ali was making Highway he too felt the same as they associate me with Housefull, Kick or Baaghi series, something that is larger than life." Clearly, we weren't the only one who had reservations. But he proved everyone wrong. So today on his birthday, let us tell you about the seven movies we couldn't believed was produced by Sajid Nadiadwala.

Many would say how can this movie be on the list when it had Ranbir Kapoor and Priyanka Chopra in the lead with commercial fare written all over it. You have got a point there. But if you remember Anjaana Anjaani spoke about the aftermath of the 2008 economic slump and also spoke about the youth who were contemplating suicides after losing their jobs. How many movies in India have explored the crisis? You tell us!

Highway is so far removed from a typical Nadiadwala film that initially we didn't want to accept it was produced by him. It didn't have star power and solely relied on content. Alia Bhatt wasn't a crowd-puller then and Randeep Hooda wasn't shown as a stereotypical hero. The movie is about stockholm syndrome and child abuse...who would have thought a man who puts his weight behind mindless caper like Housefull will find Highway up to his taste. Yes the experiment failed again but the movie earned dollops is praise and so did Nadiadwala's move to back content.

A Tiger Zinda Hai kind of movie which is far more grounded. It doesn't get overpowered by the starpower and gives the story the time to flourish. Why it's unlike a Nadiadwala film? This movie might seem like a pure masala mix but the content gets more precedence.

Dealing with relationships, the big urban facade of 'I am okay', the mundane life to earn money to survive and a lilting pace, Tamasha doesn't even have a usual romantic story. It touches upon mental health. Do we even need to explain why it was so hard for us to believe that Nadiadwala was behind it all? Sajid Nadiadwala Announces Bonus for over 400 Employees to Enable More Donations for COVID-19 Relief Funds.

Now, we never said the movie has to be a good one to qualify for this list. Rangoon is apparently Nadiadwala's first period costume drama. It's shabbily executed which becomes its undoing but it is definitely a hatke attempt by the producer.

Nadiadwala's second film Waqt Humara Hai had a college setup and a villain with a bomb. Chhichhore takes that thought and makes it much more relatable. No unnecessary dialogue baazi, no gallant hero entries, or pointless hyping of just one character. It's a movie about life in college and also an accurate description of that. No wonder not just the box office even Nadiadwala is supremely proud of being the producer of the film.

A biopic on an educator, the whole commercial part of it goes out of the window instantly. Yes, he had star power on his side with Hrithik Roshan playing the lead, but the movie didn't have any other masala attributes. It didn't even have a consistent romantic track, just a fleeting mention only.

(The above story first appeared on LatestLY on Feb 18, 2022 08:10 AM IST. For more news and updates on politics, world, sports, entertainment and lifestyle, log on to our website latestly.com).