Actor Sanjay Dutt who was recently admitted to Lilavati hospital and discharged on August 10 has reportedly been diagnosed with Stage 3 Lung Cancer. 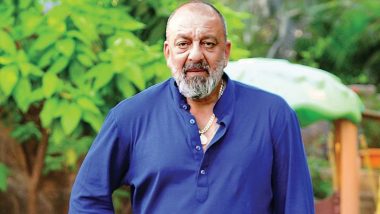 Actor Sanjay Dutt recently suffered a health scare when he was admitted to Lilavati hospital after complaining of difficulty in breathing, over the weekend. He was discharged on August 10. However, on August 11, the actor announced that he would be taking a short break from work commitment for his medical treatment. And now, if reports are to be believed, then Sanju has been diagnosed with Stage 3 Lung Cancer and the actor has been asked to immediately seek medical attention. As per reports, Sanjay will be flying to the USA for treatment. Sanjay Dutt Announces Break from His Professional Life for Some Medical Treatment, Urges Everyone Not to Speculate Anything.

Trade analyst Komal Nahta and Film and Television critic Salil Arunkumar Sand were among the first ones to tweet about the news that Dutt has been diagnosed with Lung cancer. In fact, Sanjay Dutt's mother Nargis suffered from pancreatic cancer and breathed her last, barely days before Sanjay debuted with Rocky in 1981. Sanjay Dutt Gets Discharged From Mumbai's Lilavati Hospital, Waves at the Paparazzi on Returning Home (View Pics).

Check Out Their Tweets Below:

#SanjayDutt has Stage 3 lung cancer, to fly to USA for treatment. Which you a speedy recovery!!

Sanjay, in his August 11 announcement, wrote, "Hi friends, I am taking a short break from work for some medical treatment. My family and friends are with me and I urge my well-wishers not to worry if unnecessarily speculate. With your love and good wishes, I will be back soon". Sanjay's upcoming films include Sadak 2, Torbaaz and KGF: Chapter 2. We wish Sanju a speedy recovery!

(The above story first appeared on LatestLY on Aug 11, 2020 11:19 PM IST. For more news and updates on politics, world, sports, entertainment and lifestyle, log on to our website latestly.com).