After Farah Khan's decision to remake Satte Pe Satta made headlines, seems like another big project is on its way. Sanjay Dutt has bought rights to remake, father Sunil Dutt's iconic comedy movie, Padosan with Ayushmann Khurrana and Rajkummar Rao in the lead roles. 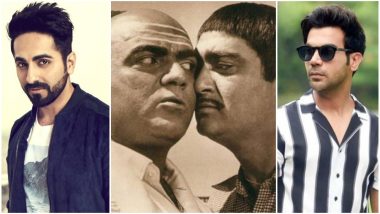 Ayushmann and Rajkummar in the remake of Padosan (Photo Credits: Instagram)

Speaking about its casting, Sanjay wants to rope in Govinda to play Mehmood's masterji. And the new story will have its twist by pitting two youths against each other. The story will have a rapper competing with a young man who practices classical music. This is where Rajkummar and Ayushmann come in the picture with Sanjay and Govinda playing their mentors. Kangana Ranaut and Rajkummar Rao's Judgementall Hai Kya Gets Screened at Rashtrapati Bhawan.

Sanjay Dutt has already acquired the remake rights from a leading distribution company and his dream of so many years may finally get fulfilled. Considering Dutt's busy schedule, the project is expected to start rolling early next year. While Khurrana and Rao's camaraderie was a major highlight in Bareilly ki Barfi, there's no way they will disappoint this time.

(The above story first appeared on LatestLY on Aug 08, 2019 08:33 AM IST. For more news and updates on politics, world, sports, entertainment and lifestyle, log on to our website latestly.com).