Sanjay Dutt's old video where he can be seen making misogynist and homophobic comments about how men should act and be the real mard is making noise online for all the wrong reasons. Check it out! 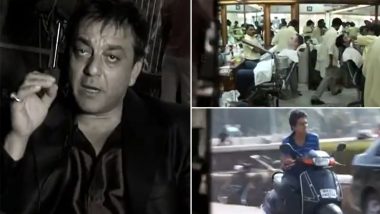 Sanjay Dutt is no stranger to controversies. From being embroiled in the toughest of terror cases to being involved in narcotics, he has done it all. And now while scrolling the web, we come across an old video of the Khalnayak star that will definitely not sit well with anyone who's open-minded. The clip in question is as Haywards 5000 ad from 2008. In the same, we see Dutt's rant on how a 'real mard' should be like. The video will boil your blood as it's misogynistic as well as homophobic. On Disha Patani’s Birthday, This Old Audition Video of the Radhe Actress Goes Viral – WATCH.

Sanjay in the video slams the metro-sexual men who spend more time at beauty parlours as compared to the gym, wax their chest, legs and prefer long hairdos. His toxic rant does not end there as he also bashes guys who choose to wear pink, purple coloured clothes and also cook. In a nutshell, the actor utters his distaste for men who have become feminine and are losing their mardangi. Sanjay Dutt Talks about the Exact Moment He Decided to End His Drug Addiction on Day 1 of #DrugFreeIndia Campaign – Watch Video.

"manliness is in danger" pic.twitter.com/MSa8VIDDgc

Well, we don't know why this clip has gone viral now, but certainly, such things need to be brought to light as many people worship stars but their reality is completely different from what they appear to be. Interestingly Dutt in his earlier films has been seen in shaven chest, long hair, and floral shirts... hypocrisy much mister?

We live in the 21st century and the definition of men has changed completely. Men these days wear makeup, heels, spend more time in the kitchen, help their partner in good-bad times, play with barbies, and much more. Gender roles are no more specific and are evolving. Stay tuned!

(The above story first appeared on LatestLY on Jun 16, 2021 12:28 PM IST. For more news and updates on politics, world, sports, entertainment and lifestyle, log on to our website latestly.com).