A new photo of Sara Ali Khan and Kartik Aaryan has surfaced on the internet and it is too cute to miss. In the photo and video, the two look adorable as they look into each other's eyes are having a conversation and also seen holding hands. Fans are already going gaga over this couple and calling them the 'Best Jodi'. Check out the video inside. 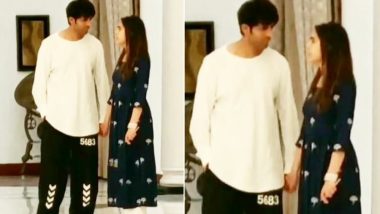 Sara Ali Khan and Kartik Aaryan recently wrapped up the shooting of their upcoming Imtiaz Ali film and it looks like they have been missing each other's company ever since. While Kartik took off to Lucknow for the shooting of his next film, Pati Patni Aur Woh, it seems Sara wanted to spend some more quality time with him and hence took off to Lucknow a few days ago. The rumoured couple have been hitting the headlines for their date nights. Recently, we saw a video fo Sara and Kartik getting mobbed by fans in Lucknow. The video went viral in no time and fans could not help but notice Kartik's protective boyfriend act in it.

Check out the video here:

Considering that Sara and Kartik are getting so much love from their fans off-screen, we can only imagine what will happen after their film releases. It will be interesting to watch the couple's chemistry on-screen. It seems that the Love Aaj Kal sequel has been an incredible experience for the duo. Kartik even penned an emotional note after wrapping the film and called Imtiaz his "dream director".Sara Ali Khan Jet Off to Lucknow to See Rumoured Boyfriend Kartik Aaryan? This Video of Her Running at the Airport Suggests So!

Kartik had even written about working with Sara for the first time saying, "And couldn't have asked for a better saathi in this journey than Princess @saraalikhan95 Want to work with you again and again and again."

The film which is yet to announce its final title is all set to hit the screens on Valentine's Day 2020. In the meantime, it will be interesting to see if the rumoured couple decide to make things official.

(The above story first appeared on LatestLY on Jul 25, 2019 12:02 PM IST. For more news and updates on politics, world, sports, entertainment and lifestyle, log on to our website latestly.com).