Sara Ali Khan and Kartik Aaryan stepped out for a dinner date in Lucknow and fans couldn't control their excitement as they thronged the venue. In a new video that has surfaced online, Kartik Aaryan is seen pulling the perfect protective boyfriend move as he guides Sara amidst the crowd. Check out the video inside. 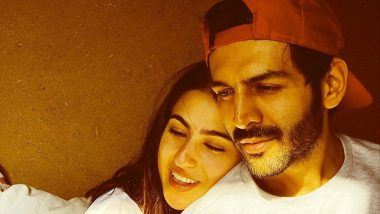 Rumours about Sara Ali Khan and Kartik Aaryan keep getting stronger and we now have enough reasons why. Not long ago, we shared a video fo Sara rushing at Mumbai airport for a flight and what looked like avoiding getting papped as she headed to Lucknow. Purpose of her visit? Well, to visit her alleged boyfriend Kartik Aaryan who has been shooting for his next film, Pati Patni Aur Woh there. A new video on social media now shows the rumoured couple hanging out in Lucknow together as they get mobbed by crazy fans.Did Sara Ali Khan Jet Off to Lucknow to See Rumoured Boyfriend Kartik Aaryan? This Video of Her Running at the Airport Suggests So!

Looks like after working together on the Love Aaj Kal sequel, Sara and Kartik got close and their fans have been so excited that the couple are now even known as 'Sartik'. While there has been no official confirmation on their relationship yet, the duo was spotted hand in hand outside a Lucknow restaurant on July 23. However, their date night might have gotten ruined after fans thronged the place to see the alleged couple. A video on social media shows Kartik being the perfect protective boyfriend as holds Sara close and guides her through the crowd. Sara is excitedly seen capturing the fan frenzy on her phone.

Check out Sara Ali Khan and Kartik Aaryan get mobbed in Lucknow:

It is lovely to see Kartik making sure to keep the fans at an arm's length from Sara Ali Khan. The duo already made the headlines when the Luka Chuppi actor turned up at the airport to receive Sara and her mother Amrita Singh who returned from their London trip, a couple of weeks ago. Ever since speculations about something brewing between the couple have been doing the rounds. PICS: Sara Ali Khan's Rumoured BF Kartik Aaryan Receives Her and Amrita Singh at Mumbai Airport and We Wonder What Happens Next!

Sara and Kartik will be coming together for the first time on-screen in Imtiaz Ali's next. While the film's final title is yet to be announced, it is believed that the film has been titled 'Aaj Kal' after Imtiaz hinted the same in his Instagram post. The romantic drama is all set to release over Valentine's Day 2020.

(The above story first appeared on LatestLY on Jul 24, 2019 03:02 PM IST. For more news and updates on politics, world, sports, entertainment and lifestyle, log on to our website latestly.com).