Saroj Khan No More: Kareena Kapoor Khan Remembers the Lessons Taught by the Mother of Choreography, Says ’Till We Dance Again’ (View Post)

Kareena Kapoor Khan is heartbroken after the tragic demise of Saroj Khan, shares some unseen pics from the time she worked with the legendary choreographer. 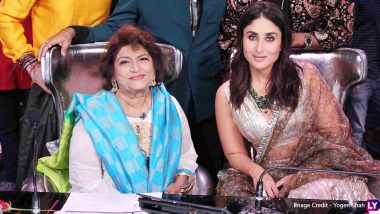 Mother of Dance/Choreography, Saroj Khan passed away at the age of 71 on July 3, 2020, around 1:52 am. The veteran was admitted at Guru Nanak hospital at Bandra on June 17 after she complained of breathing issues. Earlier, her family had issued a statement and said that Sarojji will be discharged soon and was also tested negative of coronavirus. Reportedly, the reason for her demise is said to be cardiac arrest. As soon as this tragic news surfaced online, Bollywood stars paid tribute to the legendary. Madhuri Dixit, Akshay Kumar, Farah Khan and others mourned the loss of a gem. Now, even Kareena Kapoor Khan expressed grief over Masterji 's demise. Saroj Khan Dies At 71: Beautiful and Rare On-Set Moments of the Dance Maestro With Madhuri Dixit, Sridevi, Shah Rukh Khan and Others (View Pics).

Taking to Instagram the actress shared some unseen pics from the time when she had worked with Sarojji. The photo shared by Bebo is from the sets of the film, Jab We Met where we can see the dance maestro teaching Kareena some steps to groove on the song Yeh Ishq Hai. In the same post, she also mentioned how the late choreographer taught her that if she can't move her legs, express, and atleast move the face. However, it's the last lines of her caption which will make you teary-eyed which reads, "Love you master ji. Till we dance again... RIP." Saroj Khan No More: Madhuri Dixit, Her Favourite Student is Devastated By the Loss of Her Friend and Guru.

Check Out Kareena Kapoor Khan's Post For Saroj Khan Below:

Master ji always told me... perrr nahin chala saktiii toh kam se kam face toh chalaaaaa. That’s what she taught me... to enjoy dancing, smile and smile through the eyes. There can never be another... Dance and expression can never be the same for us actors and for everyone who loved her... Love you master ji. Till we dance again... RIP 💔 #SarojKhan

Kareena might have not been the closet to Saroj Khan, but the two, when on the sets, were an example of what sheer dedication should like. Another song in which Bebo and the late star worked together was Dil Mera Muft Ka from Agent Vinod. Meanwhile, about the last rites, she was buried at around 7 am in Mumbai and the prayer meeting will be held after three days, confirmed Khan's daughter Sukaina Khan to PTI. May her soul rest in peace.

(The above story first appeared on LatestLY on Jul 03, 2020 11:35 AM IST. For more news and updates on politics, world, sports, entertainment and lifestyle, log on to our website latestly.com).