Shah Rukh Khan and Amitabh Bachchan to Do A Movie Together? 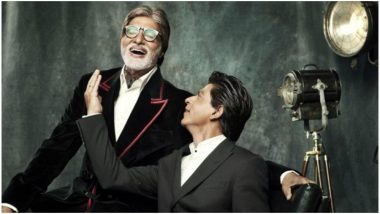 The last time they did a movie together was in 2014 when Shah Rukh Khan popped up for a cameo appearance in Bhootnath Returns, in which Amitabh Bachchan had the lead role. Now we hear that the stalwarts of Bollywood are going to do a movie together. As per a report in Bollywood Hungama, there is a movie called Bada that is in the pipeline where there two actors will play the lead.

As per the report, Shah Rukh Khan's production house Red Chillies Entertainment will be producing the movie. No other details have been given about the movie yet. If the report is true, this is not the first time Amitabh Bachchan has acted in Shah Rukh Khan's production. He had earlier shown up in a special appearance in the romantic fantasy drama, Paheli. As per reports, Shah Rukh Khan has given Big B a blank cheque to thank him for participating in the movie. Anyway, it would be cool to see Amitabh Bachchan and SRK again, after having seen them create magic in movies like Mohabbatein, Veer Zara, Kabhi Khushi Kabhie Gham, Kabhi Alvida Na Kehna.

Shah Rukh Khan will be next seen in Zero, that is directed by Aanand L Rai and also stars Anushka Sharma and Katrina Kaif. He has not officially announced any movie after that, though there are reports that he has given his nod to Rakesh Sharma biopic Salute and the Vikram Vedha remake. As for Amitabh Bachchan, he will be seen in multiple projects like Aamir Khan's Thugs of Hindostan, Ranbir Kapoor and Alia Bhatt's Bhramastra etc.

(The above story first appeared on LatestLY on Jun 16, 2018 04:57 PM IST. For more news and updates on politics, world, sports, entertainment and lifestyle, log on to our website latestly.com).