Shah Rukh Khan-Raj Kumar Hirani Movie Confirmed; All The Rumours About The Film You Must Know

Rajkumar Hirani and Shah Rukh Khan's film finally got confirmed. Haseen Dillruba writer Kanika Dhillon exclaimed on Twitter that she is excited to be part of the project which has all her favourites. Now, there are a lot of rumours surrounding this film and we have culled out a few of them for you. 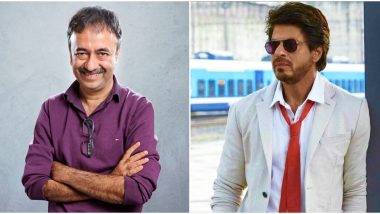 Finally, the cat is out of the bag. The Haseen Dillruba writer Kanika Dhillon confirmed on Twitter that Shah Rukh Khan is indeed working in Rajkumar Hirani's film next. She shared a TOI article and exclaimed, "Yes! Super excited for my next film! Cos am working with all the people I love n adore!This one is super special!" She tagged SRK, Hirani and Abhijat Joshi. So for an SRK fan, it's a triple bonanza. He is already begun shooting Pathan and Atlee's movie. Now Hirani's one got confirmed as well. There are a lot of rumours floating about the film and today, we have compiled five of the most interesting ones. From Don 3 to a Rajkumar Hirani Film, Every Project Shah Rukh Khan Is Rumoured to Star In!

As per a Mumbai Mirror report, this movie will be a social comedy, shuttling between Punjab and Canada. Some immigration drama with tons of subtle humour is apparently the plan here. As long as it doesn't end up being Jab Harry Met Sejal, we approve! We have faith in Hirani though. Shah Rukh Khan Gets a Place in Indian Sign Language Dictionary, Launched by PM Modi

According to Rajeev Masand's column in Open Magazine, Hirani had a two-hero project for both Shah Rukh and Salman Khan. But SRK was more inclined towards solo offers and thus, he had to redo the entire script.

Taapsee Pannu in the cast

If this is at all true, it will be really interesting to see how Hirani will pair up Taapsee with Shah Rukh. The actress has moved on from farcical side show in films like Judwaa to author-backed roles in Pink and Thappad. Women in Hirani movies don't really have a huge arc, so it will be nice to see how it will be done. The actress did deny it but you never know!

Shah Rukh Khan was supposed to be Hirani's Munnabhai many years back but the actor had turned it down. It seems finally they are getting the chance to come together and create magic, hopefully!

(The above story first appeared on LatestLY on Sep 23, 2021 07:29 PM IST. For more news and updates on politics, world, sports, entertainment and lifestyle, log on to our website latestly.com).