Recently, photos of Shah Rukh Khan paying respects to his mother and father's grave in New Delhi have gone viral. However, the reality is that the picture is old and not new. The pics are 6 years old. Have a look. 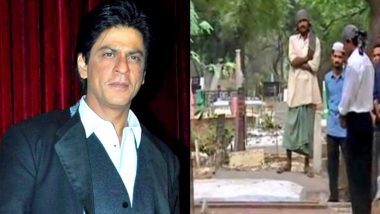 Shah Rukh Khan is not just a superstar, but there's more to him. He has always been a family man. Be it talking about his wife Gauri Khan, their kids or his late parents, the star has always proved that fam comes first for him. Talking on the same lines, King Khan has mentioned in many interviews that whenever, he goes to his hometown Delhi, he makes sure he visits his parents' grave. Recently, photos of the actor paying respects to his mother and father's grave have gone viral. However, the reality is that the picture is old and not new. The pics are 6 years old. Shah Rukh Khan's Look For Pathan Leaks! Pics Of SRK In Long Hair Will Get You Excited About The Film.

In the viral photos, SRK could be seen visiting his parents, Mir Taj Mohammed Khan and Lateef Fatima Khan’s grave in a cemetery to pay respect to them. He could be seen bowing down and remembering the departed souls. Bollywood photographer Viral Bhayani shared a few photos of the star praying in the cemetery. “ Pathan: Shah Rukh Khan Spotted Shooting for High Octane Action Scenes in Dubai.

Check Out The Viral Pics:

Talking about the actor's parents, while his father Mir Taj Mohammed Khan breathed his last when he was a child whereas his mother Latif Fateema Khan died from cancer in 1990.

Workwise, SRK will be seen in a never seen before avatar in Pathan, where he will be seen opposite Deepika Padukone. It also has John Abraham playing a key role. This will also mark the star's comeback to the industry after his last Zero (2018). Stay tuned!

(The above story first appeared on LatestLY on Mar 07, 2021 01:53 PM IST. For more news and updates on politics, world, sports, entertainment and lifestyle, log on to our website latestly.com).