Shahana Goswami Birthday Special: 5 Roles Of The Actress That Deserve A Huge Round Of Applause

Shahana Goswami turns a year older today and to celebrate her, here're five roles played by the actress that's our favourite. 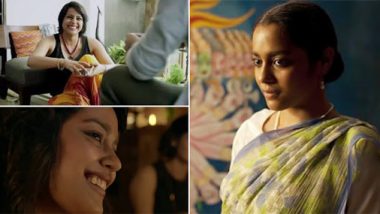 Shahana Goswami's breakthrough role was with Rock On. She played Arjun Rampal's loud wife who is mostly seen in the film screaming at him and yet that role made many aware of a golden talent like Goswami. Shahana did play characters worth mentioning in films like Honeymoon Travels Pvt. LTD but her role in Rock On! gave her recognition. Since then associating her with gritty roles has become a given for us. A Suitable Boy Adaptation: Ram Kapoor, Shahana Goswami and Vivek Gomber on Board for Mira Nair’s BBC One Series

On her birthday today, we will tell you about five roles of Shahana Goswami that make us believe she deserves much more than what Bollywood has offered her so far.

Like we said before, it was Shahana's breakthrough role despite being pretty one-dimensional. Her spark and the aggressiveness she shows as a woman who gave up her career for her husband's family business will make you clap.

The film was a trashy copy of 2004 Hollywood title If Only but Shahana's spontaneity and charm were effortless. So despite the fact that the film nosedived, she shined. Guess that's what happens to talented people.

She is fiery yet vulnerable when the world seeds in her irreparable doubts about her own friend, Shahana as Muneera is absolutely believable.

She played the wife of an affluent man, still in love with a poet and it was one of the most sincere portrayals in the film.

A refreshing movie on Mumbai and its spirit where Shahana Goswami's Kavya makes you wonder why don't we see her often on the big screen. She is delightful in the film even though her character is tad impatient in the relationship.

(The above story first appeared on LatestLY on May 06, 2020 08:20 AM IST. For more news and updates on politics, world, sports, entertainment and lifestyle, log on to our website latestly.com).