Due to the increasing numbers in coronavirus, the makers of Shamshera have decided to postpone the shooting of the film. Read on. 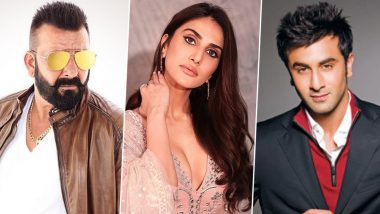 The coronavirus pandemic is real and there is no running away from it. Since a long time due to the crisis, film shoots were stopped. However, it's been a while since the government has granted permission to get back on the track along with following certain guidelines. Amid this, many movie shoots have resumed, but the latest we hear is that Shamshera's shooting has been postponed. As per a report in TOI, the Sanjay Dutt, Ranbir Kapoor and Vaani Kapoor starrer which was supposed to start shooting its remaining portions from August 1, will now do the needful after 15 days or so. Ranbir Kapoor's Shamshera to Release Directly on an OTT Platform? Vaani Kapoor Answers...

Speaking to the portal and confirming it, Ashok Dubey (General Secretary, FWICE) said, "Yes, there has been a delay by a fortnight as far as 'Shamshera' is concerned. The shoot for its remaining portions will now begin around August 15." Ranbir Kapoor And Sanjay Dutt To Resume The Shoot Of Shamshera Soon?

Well, the major reason behind the postpone is reportedly the growing number of COVID-19 patients day after day. For the unversed, Shamshera's initial release date was July 31, but due to the pandemic, the shoot got stalled and a few portions were left incompleted. Also, earlier Vaani Kapoor in interaction with Rajeev Masand had revealed that the makers of Shamshera are not planning for an OTT release. The film based is said to take you back in time in the 1800 era. Stay tuned!

(The above story first appeared on LatestLY on Jul 21, 2020 11:34 AM IST. For more news and updates on politics, world, sports, entertainment and lifestyle, log on to our website latestly.com).