Directed by Hitesh Bhatia is a light-hearted slice of life of a retired manager, played by Rishi Kapoor and Paresh Rawal, who decides to utilise his passion for cooking and leads a rather 'sweet' double life. Sharmaji Namkeen is now streaming on Amazon Prime Video. 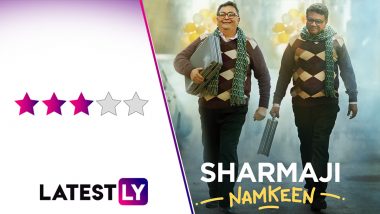 Sharmaji Namkeen Movie Review: The biggest challenge of director Hitesh Bhatia's Sharmaji Namkeen is to feature two gifted actors - Rishi Kapoor and Paresh Rawal- to play the same lead character. While Kapoor witnessed his departure from the film due to his debilitating health condition, Rawal stepped in, accepted the challenge and completed the endeavour. Rishi Kapoor made some fantastic choices in the last decade or so. From Agneepath to Aurangzeb and from Do Dooni Chaar to Kapoor & Sons, Chintuji made fans and critics alike sit up and take notice his super impressive acting prowess in what is touted to be his incredible second innings. Sharmaji Namkeen: Ranbir Kapoor Opens Up About Late Father Rishi Kapoor’s Last Movie, Says ‘This Is the Way He Would Have Liked To Go’.

In what could one truly call the ode to his father's tremendous legacy, son Ranbir Kapoor makes a quick appearance at the start of the film to confess that he decided to promote the film not because it's his father's last outing, but because this is the endeavor he had placed his faith and conviction in. Post Rishi's death the makers found it extremely difficult to get an actor of equal caliber to complete the project. Rawal tactfully stepped in only to show what a fine choice Kapoor had made before bidding his final adieu. Sharmaji Namkeen will not only warm the cockles of your heart with a rather 'sweet' tale, but it should also be seen as a rather brave endeavor as it revolves around an age appropriate character- a theme that's not much explored in an industry that places its emphasis on young and beautiful.

Truth be told, it takes a while to adjust to the transition as two actors portray the same role, but Bhatia keeps his narrative crisp. Fine editing, smart writing, and some intelligent sequencing make the ride smooth and rather enjoyable. While Kapoor turns on his charm with guaranteed results, Rawal ensures that he keeps the rhythm going by coming as much close to the character the late actor portrayed in terms of mannerisms and the range employed. In just two hours, Sharmaji Namkeen leaves a rather sweet aftertaste and one leaves appreciating the choices made by the actor who is known for perfecting and enjoying his craft right till the end. Paresh Rawal on Sharmaji Namkeen: I Loved the Script So Much That It Was Challenging yet Comforting for Me.

Sharmaji Namkeen is a slice-of-life tale of a retired employee Brij Gopal Sharma (Rishi Kapoor and Paresh Rawal) who refuses to sit at home after his voluntary retirement. He tries everything to keep himself occupied- taking up Zumba classes, becoming a property agent, giving tuition or opening a chaat papdi stall, his sons Rinku (Suhail Nayyar) and Vincy (Taaruk Raina) don't really approve and advise the aging father to enjoy his post-retirement life without causing much embarrassment to the family. Sharmaji takes his love for cooking to the next level with the able support of his friend Chaddha (Satish Kaushik).  But what will happen when Sharmaji's sons, his nosy neighbours and his reluctant sons find out about his secret double life? Sharmaji Namkeen: Ranbir Kapoor, Alia Bhatt, Kareena Kapoor Khan and More Celebs Give a Fitting Tribute to Late Rishi Kapoor Ahead of His Last Film's Release.

The director wasted no time to get the audience immersed in Sharma's world. The way the events unfold in Sharma's life are extremely relatable. Though Sharma's equation with his sons is not fully exploited and may across as half-baked, it's his chemistry with Juhi Chawla that stands out in some really endearing sequences.At places the film looks extremely predictable but the humour and the punches keep the momentum going and the film becomes an enjoyable watch-not to miss endearing and clever performances by the actors.

All in all, Sharmaji Namkeen is a breezy ride that gets predictable at places but it keeps you invested largely because it has its heart at the right place. It intertwines human relationships and the idea of how food is celebrated to make us who we are, quite beautifully. Watch it, above all, for two incredibly talented actors offering the best they can under challenging circumstances.

(The above story first appeared on LatestLY on Mar 31, 2022 10:15 AM IST. For more news and updates on politics, world, sports, entertainment and lifestyle, log on to our website latestly.com).