If I were to sit in front of the canvas and give a stroke with the brush on the white background every time she spoke, in the end, I would get a beautiful picture. That’s how I describe my interview with Shreya Ghoshal. This was my fifth interaction with her and even today as we had a long chat, the songstress does not fail to surprise me. 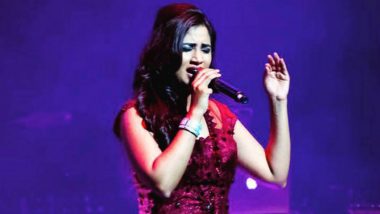 If I were to sit in front of the canvas and give a stroke with the brush on the white background every time she spoke, in the end, I would get a beautiful picture. That’s how I describe my interview with Shreya Ghoshal. This was my fifth interaction with her and even today as we had a long chat, the songstress does not fail to surprise me. We spoke for more than half an hour. First about her latest single "Angana Morey" where she has also donned hats of being a composer as well as being a lyricist. 10 years of Shreya Ghoshal Day: Singer Shares Her Joy, Says She's Very Humbled to See How Her Fans Celebrate this Day Every Year.

After speaking about the song where she showed her multifaceted side, our conversation ventured in different directions. So let’s head on!

Your single "Angana Morey" is quite different as compared to your previous single, how did things pan out for you?

"Yeh toh ho gaya. But every song has a different situation. "Dhadkane" was more of a ready song that I just had to put out. Ditto with "Tere Bina" and I loved the song because it had a bit of a thumri ang to it so I enjoyed that as well. Things changed me during "Na Hoon Main" wherein I had collaborated with my brother. For a long time, I wished to do something that I have never done. Film music restricts you to a certain genre as a lot depends on the movies, situations and various other factors. The thing is that I am not a person who would restrict myself to a genre so this time I felt like doing a modern pop rendition. It was Soumyadeep’s brainchild and he urged me to do something like this and I did it. But then we had the lockdown. (Pauses)"

"I was at home doing fewer films and recording fewer songs. I am not used to being stuck at home for so long. I have been on the road for a very long time- recordings, early morning flights for concerts. Suddenly lockdown changed the whole ball game for me. I was a home enjoying a lot of music, having good sleep, eating at the right time. So in all, I got back to the routine of life. This also included my riyaaz which I had been missing for a long time now. In this entire thing, I was yearning to do something that was very close to my roots. I wanted to do a song jisme gayaki ka ang rahe. Back then I was listening to my favourite raag Bhimpalasi and it’s my favourite raag. This was when I told Soumyadeep that I wish to do something like this. My brother being my cheerleader pushed me into it and here is the song."

So the lockdown gave you the much-needed respite from the routine.

"I think for every artist, the lockdown gave them a chance to get connected to their roots as we had a lot of spare time. Which is why you see so many singles coming up now. For me, it brought out my creativity not only in terms of the vocals but even the visuals. My previous single was shot abroad. But this had to be shot here and every single on-screen aspect had a deep thought ingrained."

We have heard you sing in Bollywood films and then we heard your vocals in songs like "Samajavaragamana" and "Vastunna Vachestunna". Do you think the South Indian music industry offers you the scope of songs that challenge you?

"Absolutely. That's the primary reason that I choose to do a multitude of regional songs. Sometimes I give a priority to them and doing this gives me the utmost creative satisfaction. The South Indian music industry is big and we have followers based out of Dubai, Singapore, Malaysia and various other places. The makers in the South are more than willing to experiment unlike Bollywood so you are not even restricted to a certain genre." (Takes a pause here...)

(Continues... "Very often in Bollywood, you are expected to deliver exactly what you have been asked for. That’s not even pressure but its humiliation and after achieving so much, I feel it’s unfair to restrict a composer or an artist that way. In fact, when the makers approach a composer for a film, it’s not just for one song. The composers have the entire album and the background score of the film, unlike Bollywood. Here in the Hindi film industry, there are times that the song does not match the situation of the song."

The last time we spoke in 2017, you had said that the concept of having remakes of old melodies in the film is a passing phase, but the makers still rely on recreations. Comment.

"This is a very sad state of affair as the ratio of recreations vs original songs is 60: 40. Even if there are original songs, they sound like some old songs. I think the producers and labels are not encouraging the right kind of music. But I am still hopeful that this is just a phase. The lack of originality in Bollywood has led to the emergence of indie space. However, the YouTube space is cluttered with a mixed bag of content. I mean there is so much content that the fans do not know what music is good. Many of them even use the money to get likes and views for their content which is quite wrong." (takes a pause here...)

(Continues...) "Coming to remakes in Bollywood, I still feel it’s a phase that will pass away soon. We still have songs like ‘Ghar more pardesiya’ which are being made. To aisa kaam hote rahega. So I am hopeful."

Along with the songs, the shelf-life of the singers has also reduced. Comment.

"I feel that the talent which sustains for a long time isn’t born every day. So you need time to know if an artiste will sustain for a long time. It doesn’t happen overnight."

Replacing singers is also a concept that has been existing for a long time. What do you feel about this?

"This concept has been existing for a while now. But thankfully I am in a privileged position that a composer approaches me only if he is confident that the song will release in my voice. But the strugglers have a tough time when 50 people sing one song. But I feel after you have sung a couple of songs, you shouldn’t be treated that way."

Coming to the lighter side, what do you think about the massive fan following you have on social media?

"What do I say about them? Sometimes I wonder how they manage to keep a track of my activities so well. They are an intelligent bunch of people. Some of them are studying and the others are working. I mean they are doing well in their lives and I feel so proud of them. I would say that they are my extended family."

Do you miss being on stage for concerts?

"Of course, now I do. It’s been so long and I am missing the vibes of a concert and this lockdown has given me an opportunity to experiment with my concerts. So whatever you will see next will be the 2.0 version of Shreya on stage."

As we sign off Shreya promises to all her fans that she will keep coming up with a gem of melodies. But on one criterion - She needs to stun herself creatively every time she creates a song. Needless to say, Shreya never fails to stun us!

(The above story first appeared on LatestLY on Feb 20, 2021 01:57 PM IST. For more news and updates on politics, world, sports, entertainment and lifestyle, log on to our website latestly.com).