Sidharth Malhotra Birthday Special: From Mission Majnu to Yodha, Every Upcoming Movie of the Bollywood Star

Sidharth Malhotra turns 37 today and is undoubtedly one of the most successful actors in Bollywood. Let us take a look at every upcoming film of the actor. 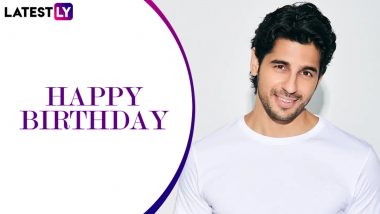 Bollywood star Sidharth Malhotra began his film career in 2012 with Karan Johar's Student of the Year starring alongside Alia Bhatt and Varun Dhawan. The actor turns 37 today and is undoubtedly one of the most successful actors in Bollywood. The actor was last seen in Shershaah (Captain Vikram Batra biopic) that was released on Amazon Prime Video and was well received by the viewers. The actor has some interesting projects lined up for release as well. Yodha: Sidharth Malhotra and Disha Patani Made a ‘Sexy’ Reel With Thier Fury Friend and We Are Totally Digging Their Vibe (Watch Video).

Sidharth Malhotra's Bollywood debut with Student of the Year (2012) was a huge hit. Since then he had some hits and misses and his filmography includes films like Hasee Toh Phasee (2014), Ek Villain (2014), Brothers (2015), Kapoor & Sons (2016), Baar Baar Dekho (2016), Ittefaq (2017) and Shershaah (2021) On actor's birthday, let us take a look at every upcoming Sidharth Malhotra movie which is yet to release. Sidharth Malhotra Grooves to ‘Ranjha’ Song From Shershaah at Cousin’s Delhi Wedding, Video Goes Viral!

Sidharth Malhotra is all set to lead Karan Johar’s first action film franchise Yodha. Actress Raashii Khanna and Disha Patani are the lead actresses. Karan Johar announced the project in Nov 2021 informing that the film will release in November 2022.

Sidharth Malhotra's Mission Majnu is based on India’s greatest covert operation that derailed Pakistan’s illicit Nuclear Ambitions! The film is based on true events and is even more exciting as south star Rashmika Mandanna is all set to make her Bollywood debut with the film.

Sidharth Malhotra and Ajay Devgn to star in a film for the first time together in the upcoming film Thank God, The slice of life film will be directed by Dhamaal director Indra Kumar and also stars Rakul Preet Singh as the female lead.

LatestLY and team wish Sidharth Malhotra a happy birthday and keep entertaining fans with your films in years to come.

(The above story first appeared on LatestLY on Jan 16, 2022 08:40 AM IST. For more news and updates on politics, world, sports, entertainment and lifestyle, log on to our website latestly.com).