Sonu Sood Birthday Special: 5 Movies Of The Actor We Love And Where To Watch Them

On Sonu Sood's birthday today, let us tell you about five Sonu Sood movies that you ought to watch and cheer. 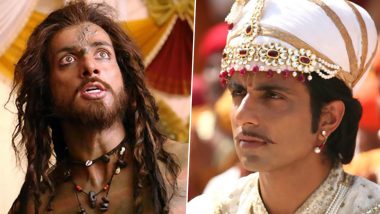 During this lockdown, Sonu Sood emerged as a messiah for a lot of people in need. He sent many migrants, left stranded and abandoned after the lockdown was imposed on them, home. Their move to walk to their villages on foot left everyone shocked and hurt. Sood is perhaps the only one who took it upon him to make sure they reach their homes safely, be it in buses or trains. He continues to do his good deeds which earned him the moniker 'reel life villain real-life hero.' In his career as an actor, Sonu has delivered some memorable performances and most of them are negative ones. He has also worked in many regional language movies, making him a pan-Indian talent. Sonu Sood Comes Forward to Help Veteran Actor Anupam Shyam, Confirms ‘He’s In Touch With Them’ As CINTAA Appeals For Donation (Read Tweet)

On his birthday today, let us tell you about five Sonu Sood movies that you ought to watch and cheer.

The perfect height, built and face made him an ideal Bhagat Singh at a time when making movies on this beloved patriot was a contest in Bollywood. Ajay Devgn and Bobby Deol too decided to portray the legendary freedom fighter but Sonu's turn was fresh and believable. You can watch it on Youtube.

Watch it on: Netflix

Sonu Sood plays Gopal, Abhishek Bachchan's elder brother in the film. He is a goon from Bihar. His equation with Bachchan is the highlight of the character as Sood is unapologetic about his rash behaviour towards his brother.

Where to watch them: Netflix

Sonu played Sujamal, Jodhaa's favourite brother. He kept it restrained, sweet, and smooth which will make you like him immediately. His scenes with Aishwarya Rai Bachchan were one of our favourites in the film.

Where to watch it: Amazon Prime Video

The deadlocks, his getup, and those big eyes, Sonu Sood was unrecognisable as the malicious Tantrik. His viciousness is stuff nightmares are made of.

Where to watch it: Netflix

Who doesn't know Chedi Singh? When you have a Salman Khan as the cop, you need someone like Sonu Sood to give him a perfect challenge. While people obsessed over Salman's body, Sonu earned a lot of acclaim for his bad man turn. Brute, and brash...Chedi Singh was a perfect villain with a desi touch.

(The above story first appeared on LatestLY on Jul 30, 2020 10:10 AM IST. For more news and updates on politics, world, sports, entertainment and lifestyle, log on to our website latestly.com).