A teaser of the song was dropped on the internet today, and it is evident that we are going to see Varun and Nora kill it with their dancing skills. Garmi has been crooned by Badshah. 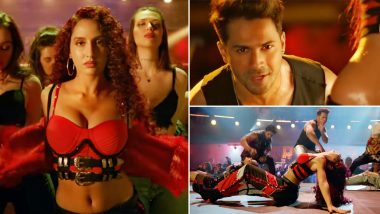 A new Nora Fatehi sizzler is on its way. The sexy lady will be seen grooving to the beats of a new song from Street Dancer 3D. She went missing from the previously released song, Muqabla remake and we feel the music video missed out on a million views at the very least because of it. The next song is titled, Garmi, and will also feature Varun Dhawan, film's lead, along with Nora. A teaser of the song was dropped on the internet today, and it is evident that we are going to see Varun and Nora kill it with their dancing skills. They seem to be engaging in a dance battle of sorts at a bar.

Garmi has been crooned by Badshah. So there is that extra leverage the upcoming number has on us. Neha Kakkar has also sung the song. Two forces have joined hands. We might have the next chartbuster on our hands. We will find out tomorrow.

Check Out The Teaser of Nora Fatehi's Garmi Here:

At least, Nora's presence will ensure that the song, Garmi, will get a good number of views on YouTube. She is not only hot but an incredibly talented dancer who holds gaze on the screen. Her song Dilbar is still rising the charts on the most-viewed Indian music video list on YouTube. She even managed to keep the audience entertained in an otherwise mediocre song, Ek Toh Kam Zindgani from Marjaavaan. She was also amazing in Kamariya from Stree. Also, this time in Street Dancer 3D, we will get to see Nora act after a long time.

We are looking forward to it.

Remo D'Souza has directed Street Dancer 3D. Prabhudeva and Shraddha Kapoor also star in the film alongside Varun and Nora. The movie will open in theatres on 24 January, 2020.

(The above story first appeared on LatestLY on Dec 25, 2019 04:28 PM IST. For more news and updates on politics, world, sports, entertainment and lifestyle, log on to our website latestly.com).