On Suniel Shetty's birthday today, check out some of the lesser known facts about him. 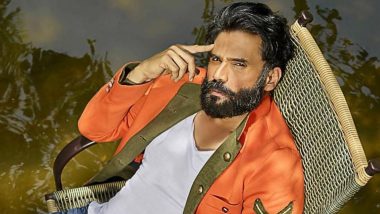 'Main tumhe bhool jaon yeh ho nahi sakta....aur tum mujhe bhool jao yeh main hone nahi doonga' this is one of our favourite quotes from a very whiny movie called Dhadkan. The dialogue belongs to Suniel Shetty and even today, that is seen as his trademark way of saying his lines. He tore into the Bollywood scene as an action hero which was interestingly named Balwaan in 1992. The whole of that decade went in packing in more and more fight dramas for Shetty which made him pretty famous. But would you believe us if we say he has some of the most popular dance tracks under his belt? Hai hukku, Jhanjhariya, Sheher ki ladki, Kya adab kya jalwe tere paro, we can name them all day. For a He-man to be a dancing man, Shetty had surely the moves to carry it off. Shahid Kapoor and Jackie Shroff Are the Best-Dressed Men, Says Suniel Shetty

On his birthday today let us find out a bit more Suniel Shetty, who is Bollywood's favourite Anna.

In an interview to TOI, Shetty disclosed that he started his clothing line when he was only 18. "After 30 years, all of us have come together to take the brand forward. My dad left home (Mangalore) at the age of nine. He came to Mumbai and worked as a cleaner boy," he added.

Suniel had revealed to the media not long ago that a critic had called him wooden after watching Balwaan. "I never dreamt that I would end up doing dangerous stunts in films. I did it because even after the success of my first film, a particular critic, who was very powerful at that time called me 'wooden material' and he said that I should go back to my family's restaurant business. So, I took it up as a challenge. I told myself I needed to do something where I could be different", he shared.

#Debut and a debut

Suniel and his daughter Athiya debuted on the same day, September 11. Balwaan released in 1992 and Hero hit the theatres in 2015.

Suniel Shetty has a black belt in kickboxing and is one of the fittest actors in the business today.

Apparently, Suniel Shetty was detained at the LA airport after the 9/11 attacks. He was sporting a scruffy goatee beard for Kaante. The officials thought he was a suspect and he had to prove that was in fact a Bollywood actor.

(The above story first appeared on LatestLY on Aug 11, 2020 08:20 AM IST. For more news and updates on politics, world, sports, entertainment and lifestyle, log on to our website latestly.com).