A 38-year-old man, Piyush Sen, was arrested by the Versova police for using a car number for his Mercedes that was already registered in the name of Sunny Leone's husband Daniel Weber. Check out the full story. 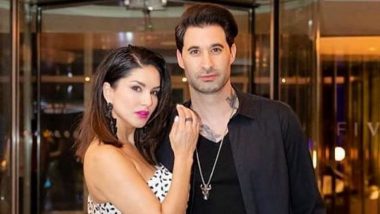 A 38-year-old man, Piyush Sen, was arrested by the Versova police for using a car number for his Mercedes that was already registered in the name of Sunny Leone's husband Daniel Weber. Reportedly, the police had taken the accused in a custody for a day on Wednesday (Feb 24). In September 2020, the actress' husband Daniel had received a few e-challans for not adhering to road safety rules which were actually committed by Sen, confirmed a police officer. Piyush lives at Khadagpada in Kalyan. Madhur Mittal, Slumdog Millionaire Actor, Booked by Mumbai’s Khar Police for Sexually Assaulting His Former Girlfriend.

It was on Tuesday (Feb 23) when Daniel's driver Akbar Khan saw a car using the same number as his boss' at Achyutrao Patwardhan Marg in Andheri, Mumbai. The driver then reported the misuse of Weber's car number to DN Nagar traffic constable Akush Nirbhavane. While the accused had the original papers of his Mercedes, it had different registration and chassis numbers. The whole reason behind Sen using Daniel's car number was that he felt it would prove lucky for him.  Mumbai Doctor Booked For Sexual Assault on COVID-19 Male Patient, Accused Home Quarantined For Two Weeks.

Currently, the police are looking into this matter. “The traffic police have registered a case under section 420, 465, 468 of the IPC and the Motor Vehicle Act 139 at the Versova police station, "said Joint Commissioner of Traffic Yashasvi Yadav. Stay tuned!

(The above story first appeared on LatestLY on Feb 25, 2021 03:06 PM IST. For more news and updates on politics, world, sports, entertainment and lifestyle, log on to our website latestly.com).