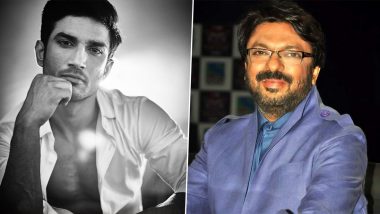 Many Bollywood celebrities are being interrogated by Mumbai Police with regards to Sushant Singh Rajput's death. And now as per the latest reports, filmmaker Sanjay Leela Bhansali will soon be called by the police for a questioning round, confirmed a well-placed police source. A summon has also been sent to the 'Padmaavat' director asking to be present before the police, elaborates the report. The source further revealed that casting director of the Yashraj Films, Shanoo Sharma, will also be called for the second round of interrogation. She first appeared at the Bandra police station on June 28. Sushant Singh Rajput's Demise: Sanjay Leela Bhansali Had Offered SSR 4 Films, Contrary To The Case Filed Against The Filmmaker? (Read Details).

For the unversed, Shanoo Sharma has worked with late actor Sushant Singh Rajput in two films namely Shuddh Desi Romance and Detective Byomkesh Bakshy! which were produced by Aditya Chopra. Well, the questioning session does not end there as reportedly even actress Kangana Ranaut and Shekhar Kapur will also record their statements soon.

Earlier, as reported by ANI, a case was filed by advocate Sudhir Kumar Ojha against filmmakers-producers which also included Bhannsali's name. Ojha has alleged that 'Sushant Singh Rajput was removed from around seven films and some of his films were not released.' Sushant Singh Rajput’s Dil Bechara Co-Star Sanjana Sanghi Pens Few Lines on Mumbai, Hints at Never Returning to the City of Dreams.

After this, a statement in ETimes revealed that SLB did offer Sushant four films but nothing materialised between the two. “Many people in the industry are expressing their grief and not many know that both Sushant Singh Rajput and Sanjay Leela Bhansali were quite fond of each other as well as their work. In fact, not once but 4 times working together was on the cards for them, SLB had offered him 4 films, but due to date issues, things didn’t materialise," the statement read.

Sushant Singh Rajput died by suicide on June 14. It was on June 30, when his Dil Bechara co-star Sanjana Sanghi went to the Bandra police station to record her statement. The film is directed by Mukesh Chhabra. Stay tuned!

(The above story first appeared on LatestLY on Jul 02, 2020 03:12 PM IST. For more news and updates on politics, world, sports, entertainment and lifestyle, log on to our website latestly.com).