The actor's death on June 14, 2020 has taken the nation by storm as the investigation into the tragic demise is getting murkier day by day. 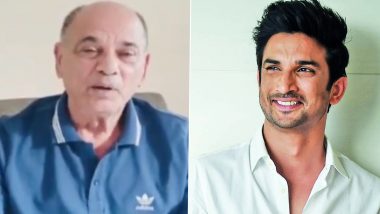 Sushant Singh Rajput's death case is taking terrible turns on daily basis. The actor's death on June 14, 2020 has taken the nation by storm as the investigation into the tragic demise is getting murkier day by day. After pinning blames on mental health, nepotism, girlfriend Rhea Chakraborty, investigation process; no concrete evidence has been found. Now, in the recent development on the case yet again, the late actor's father has given a statement in a video. He says that they had alerted Mumbai police in February. Sushant Singh Rajput Fainted On Hearing About Disha Salian's Suicide, Reveals Late Actor's Flatmate Siddharth Pithani.

The video that is posted by Times Now, has K.K.Singh speaking up on the matter. In the clip, he is seen saying that the family had alerted Mumbai Police on February 25, 2020. He further added that the police did not act on the complaint and he then later went on to file an FIR with Patna police after his demise.  Check out the video below.

#Exclusive #Breaking | Sushant Singh Rajput's father speaks out; claims he alerted the Mumbai Police on February 25 & cops did not act on the complaint.

Earlier, the family accused Rhea Chakraborty and five others of abetment of suicide and other allegations. She released a video where she said that accusations are false. However, the actress is currently missing from her Mumbai residence and the officials are searching for her whereabouts.

(The above story first appeared on LatestLY on Aug 03, 2020 06:32 PM IST. For more news and updates on politics, world, sports, entertainment and lifestyle, log on to our website latestly.com).