Sushant was found hanging from the ceiling of his Bandra home on June 14. The case investigation took a turn on July 26 when Sushant's father KK Singh filed an FIR against Rhea Chakraborty and 6 others for abetment of suicide, wrongful confinement, theft, fraud and cheating. 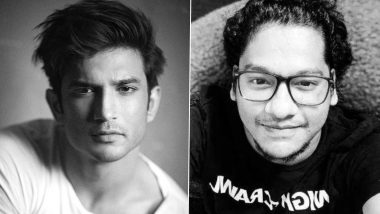 Sushant Singh Rajput’s friend Siddharth Pithani has now made shocking revelations with regards to the former's mental health and how his name is linked to that of his brief ex-manager Disha Salian's suicide, affected Sushant. As per Siddharth's claims, Sushant was so affected with reading his name in articles related to Disha's suicide that he broke down and even fainted on June 8. And as per Siddharth's statement, his sister was present, which his breakdown took place. Sushant Singh Rajput Searched on Google 'Painless Death', 'Bipolar Disorder', 'Schizophrenia' and His Own Name The Night Before His Suicide, Reveals Mumbai Police Commissioner.

As per Hindustan Times, who quoted Zoom, Siddharth revealed, "He met her only once in his life. She was Sushant’s manager for only a very small time. His sister was there to take of him that time (Disha's suicide). She fed him, gave him water. His sister came over the day Rhea left. The following day this incident happened, and that affected him so much. He fainted also. His sister and me were in the same room. We all saw how badly it affected him." Sushant Singh Rajput Death Investigation: Bihar Police Reveal Sim Cards Used By Late Actor Were Not Registered Under His Name; To Now Pull Call Records (View Tweet).

Siddharth also revealed that he had slept with Sushant in his room until the actor fell asleep and then only went back to his room. He also confirmed that Sushant was under medication for depression and there was a time when he was also in charge of making sure Sushant took his prescription.

Recalling how Sushant had asked him to move in, Siddharth went on to reveal, "Sushant said, ‘I have no one. We will go away from all this. We will go to Pavna’."

Sushant was found hanging from the ceiling of his Bandra home on June 14. The case investigation took a turn on July 26 when Sushant's father KK Singh filed an FIR against Rhea Chakraborty and 6 others for abetment of suicide, wrongful confinement, theft, fraud and cheating.

(The above story first appeared on LatestLY on Aug 03, 2020 05:08 PM IST. For more news and updates on politics, world, sports, entertainment and lifestyle, log on to our website latestly.com).