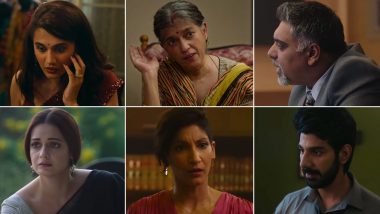 Taapsee Pannu collaborates with Anubhav Sinha once again for a hard-hitting drama that essentially revolves around a 'thappad' or a slap. The actress known for her strong and powerful subjects will essay the role of a housewife who demands a divorce after her husband slaps her at a party. The filmmaker here tries to establish a premise or emphasize on the fact that no amount of justification is valid to explain wrongdoing and it's time we question the misogynist mentality of our society. Thappad First Look Out! Taapsee Pannu's Pain After The Slap Will Leave You Feeling Hurt (View Pic).

Thappad shows Taapsee acing her role as a housewife who later gets determined to correct her life and seek justice for herself in some way. A thought-provoking and a powerful drama that questions why 'abuse' is seen as a form of love in relationships. Though Taapsee had earlier cleared her stance on the whole Kabir Singh controversy and explained why it made her uncomfortable, Thappad is essentially an attempt to highlight that abuse in any form would not and should not be tolerated. Taapsee Pannu Recalls Twisting a Man’s Finger Who Tried to Touch Her from Back.

(The above story first appeared on LatestLY on Jan 31, 2020 12:39 PM IST. For more news and updates on politics, world, sports, entertainment and lifestyle, log on to our website latestly.com).