Is Kim Kardashian West Sporting a Salman Khan Bracelet in This Pic? Bhai Fans Want The Fashionista To Return His Lucky Charm!

Kim Kardashian's post a few days back has put Twitter in a tizzy. The netizens just can't shake off the feeling that her choker resembles that of Salman Khan's bracelet. Many even went ahead requested her to return his bracelet to him as well. Of course, everything's done in pure jest! 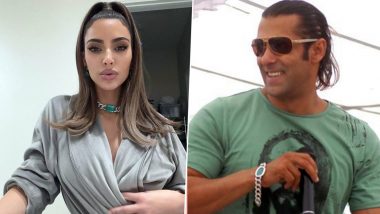 Kim Kardashian West is very active on social media. Her posts get a lot of traction but one of them recently has left many on Twitter shocked. Kim had posted a picture of herself wearing a satin dress and accessorised it with a choker with a green stone. That reminded people on Twitter they have seen something similar and prompt came the answer - Salman Khan. You all know about the bracelet that the actor wears everywhere and has been doing so since many years. He had once said that the bracelet was his father's who gave it to him. Since then, it has been a fashion fad among the die-hard fans of the actor. Tiger Shroff Says Salman Khan’s Bracelet Would Have More Followers Than Him on Instagram

We don't how Kim reacted to it but many on social media are requesting her to return Salman's bracelet to him. Of course, it's done in plain jest but we have to commend how much people notice. Check out some of the comments here.

Of course, Salman Khan needs to be tagged!

@BeingSalmanKhan what would u say, that necklace looks little bit same like ur bracelet.

Yes, it's a humble request!

And the doubts continue...

Kim had a few years back had praised Salman Khan and Shah Rukh Khan. She even went ahead and called herself a Salman fan. There were reports of her featuring in Bigg Boss season 8 as well. So is there a chance that she got inspired by the actor's bracelet?

(The above story first appeared on LatestLY on Feb 01, 2021 02:13 PM IST. For more news and updates on politics, world, sports, entertainment and lifestyle, log on to our website latestly.com).