In the film, based on the life of the late Shakuntala Devi, who is widely revered as the human computer for her innate ability to make complex mathematical calculations within seconds, Vidya flaunts long hair to a short bob in different phases. 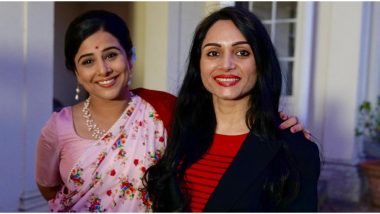 The people behind Vidya's various looks -- Shreyas Mhatre, Shalaka Bhosle and Niharika Bhasin -- had to research immensely to showcase the character in the most authentic manner.

Mhatre, who took care of the make-up, told IANS that he went through Shakuntala Devi's pictures and tried to match it with Vidya. Shakuntala Devi: How The Math Genius' Daughter Helped in Developing Vidya Balan's Character in the Biopic.

"I had to create different looks based on Shakuntala Devi's age in the film. I did research on Shakuntala Devi, went through her pictures and tried to match Vidya's look with her face. After a lot of discussions with Vidya and the director, I settled down for these five looks," Mhatre said.

In the film, based on the life of the late Shakuntala Devi, who is widely revered as the human computer for her innate ability to make complex mathematical calculations within seconds, Vidya flaunts long hair to a short bob in different phases.

Shalaka Bhosle told IANS that the film essentially captures the different stages of Shakuntala Devi's life between 1940s and the 2000s.

In terms of ensembles for Vidya, Niharika Bhasin, who did the styling, agrees that with costumes it really gets difficult.

"Normally we sit down and decide hair, make-up, wardrobe together, so all of it comes together to formulate the look of a character. We researched Shakuntala Devi's lifespan and found out what were the aspects of style and fashion that were prevalent during those decades. We added that to recreate the character," Bhasin said.

Bhasin added that the research went into "what was happening in India fashion-wise in those times" adding: "She was wealthy enough to follow the fashion or she was in tune with fashion. Therefore, it took a lot to build the character."

Directed and written by Anu Menon, the film also stars Sanya Malhotra, who will be seen playing the role of Shakuntala's daughter Anupama, along with Amit Sadh and Jisshu Sengupta in pivotal roles. Shakuntala Devi: Vidya Balan's Film To Show The Late Maths Whiz's Pioneering Work In LGBT Movement And We Have Proof.

The screenplay is written by Menon along with Nayanika Mahtani, while the dialogues are penned by Ishita Moitra.

(The above story first appeared on LatestLY on Jul 21, 2020 11:42 AM IST. For more news and updates on politics, world, sports, entertainment and lifestyle, log on to our website latestly.com).