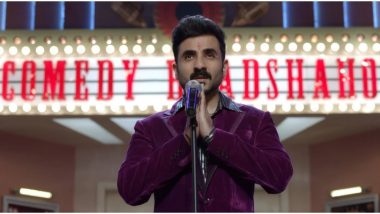 Comedian-actor Vir Das feels freedom of speech in India is not "free". On Wednesday, Vir Das shared with his followers that he has been served 13 legal notices since the start of 2020. " Here's a fun story. Since the beginning of the year I have had 13 legal notices and a High Court hearing over jokes. Jokes. Literally jokes. Lawyers, fees, meetings, time. Freedom of speech definitely exists... it just ain't free," Vir Das wrote. Manoj Bajpayee, Milap Zaveri, Vir Das Call Out KRK Over His ‘Fake Behaviour’ Towards Sushant Singh Rajput After His Death

Reacting to the post, comedian Rohan Joshi commented: "First time?" To which, Vir Das replied: "Hahah I know. Not first but costliest. This s**t adds up." In May, Delhi High Court dismissed the plea seeking an interim stay on the streaming of Vir Das' latest web series, "Hasmukh". Vir Das Birthday: 7 LIT Tweets By The Actor-Comedian That Reflect Current Situation!

The stay was sought after allegations cropped up that the show makes disparaging comments against lawyers, particularly in episode four of season one, titled "Bambai Main Bambu".

(The above story first appeared on LatestLY on Jul 08, 2020 06:20 PM IST. For more news and updates on politics, world, sports, entertainment and lifestyle, log on to our website latestly.com).