Zeenat Aman started her journey in the world of cinema in 1970 with the film The Evil Within. But her first Hindi movie happened in 1971, titled Hulchul, in which she shared screen space with Kishore Kumar and Vinod Khanna. 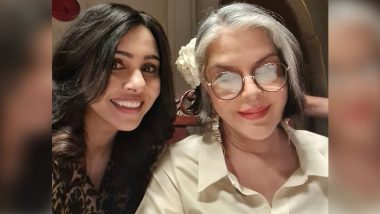 Zeenat Aman is the one most talented and glamorous actresses of Hindi Cinema. She started her journey in the world of cinema in 1970 with the film The Evil Within. It was an Indo-Filipino drama in which she shared screen space with Dev Anand. But her first Hindi movie happened in 1971, Hulchul, starring Kishore Kumar and Vinod Khanna as the male leads. The legendary actress has starred in more than 80 films and has been honoured with prestigious awards for her contributions in cinema. Margaon: The Closed File – Zeenat Aman to Star in a Murder Mystery Film That Tributes Agatha Christie’s Genre of Work.

Zeenat Aman has completed 50 years in Hindi Cinema and that definitely called for celebration. Suchitra Krishnamoorthi has shared a glimpse of the party or say the ‘pawri’, with the iconic actress and it looked like a fun-filled one. While sharing the post, Suchitra captioned it as, “Celebrating 50 yrs of #ZeenatAman in Hindi cinema. #pawrihoraihai”.

Zeenat Aman was felicitated for her contributions in the world of cinema at the closing ceremony of 51st edition of International Film Festival of India that was held in Goa. She was felicitated by Goa CM Pramod Sawant. On the work front, Zeenat Aman will be seen in a murder mystery titled Margaon: The Closed File in which she would be playing the character named Sylvia.

(The above story first appeared on LatestLY on Feb 23, 2021 02:53 PM IST. For more news and updates on politics, world, sports, entertainment and lifestyle, log on to our website latestly.com).