The latest news is that the K-Pop band is all set to perform their latest single at the 2020 awards. The band will be performing a track called "Dynamite" at the awards 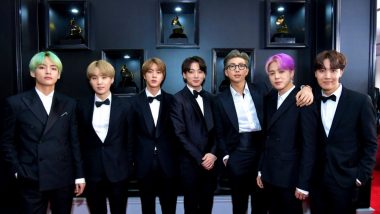 The complete nominations list for Video Music Awards aka VMAs 2020 was announced recently and well, we bet all K-Pop fans, mainly the BTS Army were over the moon given that the band received three major nominations. While this news had left BTS dancing with joy, there's another big surprise that is sure to leave them super excited for VMAs. The latest news is that the K-Pop band is all set to perform their latest single at the 2020 awards. The band will be performing a track called "Dynamite" at the awards. VMAs 2020 Nominations Full List: Lady Gaga, Ariana Grande Dominate in Nine Categories, BTS Scores Three Nods.

The VMAs will be airing live on August 30 from the Barclays Center in Brooklyn. This performance by the K-Pop band will be special given that this is the first-ever performance at the show. BTS will be joined by fellow first-time performers Doja Cat who have bagged three nominations and J Balvin who has bagged four nominations. More performing artists are yet to be announced though for BTS fans, the announcement has come early enough for them to mark their calendars. BTS' Jungkook Tests Negative After Visiting COVID-19 Hotspot In Itaewon, South Korea; Agency Issues Apology.

BTS have bagged VMA nominations in the Best Pop, Best K-Pop, and Best Choreography and fans are rooting for them to bag these amazing honours. Among other nominees, Ariana Grande and Lady Gaga are leading with nine nominations each. Luckily for BTS fans, before the band performs their new single at the VMAs, the song is all set to be dropped on August 21. “Dynamite" is their first single from their upcoming new album which is untitled as of now.

(The above story first appeared on LatestLY on Aug 05, 2020 12:35 PM IST. For more news and updates on politics, world, sports, entertainment and lifestyle, log on to our website latestly.com).