Sidharth Shukla shares a romantic poster from his upcoming song Dil Ko Karaar Aaya along with its release date. Check it out. 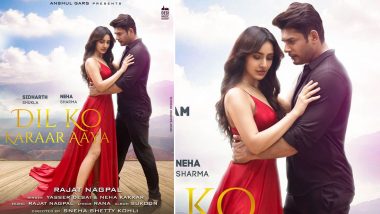 Television dude Sidharth Shukla hardly needs any introduction. Over the years, the lad has wowed the audiences with his multi-talented skills. From being a kickass host to impressing the masses via daily soaps like Balika Badhu and Dil Se Dil Tak, Shukla has been ruling hearts from quite a long time. All that being said, how can we not talk about Bigg Boss 13 where he turned into a winner and proved there is no one like him. Post the show, he was seen in a music video with Shehnaaz Gill titled Bhua Dunga. And well, his upcoming venture is also a song starring Neha Sharma. This one is Dil Ko KaraarAaya! Dil Ko Karaar Aaya First Look: Sidharth Shukla and Neha Sharma's Chemistry Looks Palpable (View Pic).

Earlier, Sid had shared the first look poster of the melody and fans could not keep calm. Now, on Wednesday, the Bigg Boss winner teased fans with a new poster of the song along with its release date. Yep, Dil Ko Karaar Aaya is releasing on July 31, 2020, at 11 am in the morning. In the latest poster, Sid can be seen posing with Neha where he is ogling at her while she looks pretty hot in a red thigh-high slit dress. Dil Ko Karaar Aaya: Sidharth Shukla Shares a Glimpse From His Upcoming Music Video Opposite Neha Sharma and Fans Can’t Contain the Excitement!

Dil Ko Karaar Aya is sung by Neha Kakkar and Yasser Desai whereas the music is composed by Rajat Nagpal. Well, after the date of the song is out #SidHearts will be on cloud nine. Meanwhile, according to some reports, Sidharth Shukla is already finalised as the lead in Broken But Beautiful Season 3. Stay tuned!

(The above story first appeared on LatestLY on Jul 23, 2020 10:16 AM IST. For more news and updates on politics, world, sports, entertainment and lifestyle, log on to our website latestly.com).