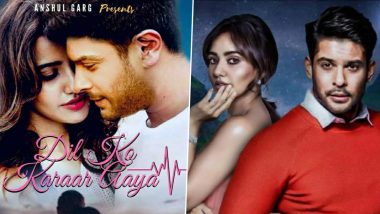 Before winning Bigg Boss 13, Sidharth Shukla was already a well-known television star. His characters in Balika Vadhu and Dil Se Dil Tak made him a household name. However, it was BB 13 which flashed his real side to the world and rest is history. Post the reality show, after Bhula Dunga, Dil Ko Karaar Aaya will be the actor's second music video alongside Neha Sharma which will be out soon. Earlier, Sharma had teased fans with a glimpse from the melody where she was seen in a yellow dress. And now, on July 13, Sidharth made his fans crave for more as he also dropped a stunning look of himself from the music video. Sidharth Shukla and Monalisa aka Antara Biswas Look Unrecognisable In This 'Resham Ka Rumal' Music Video.

In the picture, Sid can be seen looking alluring in a whole black look. The BB 13 winner captioned the image as 'Coming'. Reportedly, the song has been shot in Della Resorts, Khandala and is made by Desi Music Factory. As soon as Sid shared a pic, his upcoming project became the talk of the town and started trending on Twitter. Bigg Boss: From Sidharth Shukla to Priyank Sharma, Here Are 15 Contestants Who Were Thrown out from the Show over Bad Conduct.

And Here Are Some Fans Reactions:

They look cute together ❣

Here it is Our King #SidharthShukla ✓

Finally I Got His Pics😭♥️So Happy!

This Pic is For all Lovely #SidHearts & #SidNaaz Fans ✓✓

A little late but Oh my! He looks handsome, stunning, attractive, ravishing and hot!! Any more adjectives to add?

After looking at the fans reaction above even we are all excited for the music video. Meanwhile, apart from the music video, reports are that Sid is already confirmed and part of web show, Broken But Beautiful 3. However, looking at the current scenario looks like the show will not get ready before the end of 2020. Stay tuned!

(The above story first appeared on LatestLY on Jul 14, 2020 08:22 PM IST. For more news and updates on politics, world, sports, entertainment and lifestyle, log on to our website latestly.com).