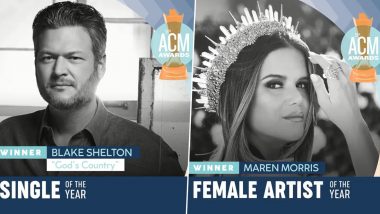 The 55th Academy of Country Music Awards or the ACM Awards was originally scheduled to go air on April 5 in Las Vegas, Nevada. However, the date had to be pushed back and the location also had to be changed owing to the coronavirus pandemic. The annual awards show is currently being held in Nashville, Tennessee and is being aired live from three different country music venues and they are - The Grand Ole Opry House, The Ryman Auditorium and The Bluebird Café. The 55th ACM Awards has also announced the winners’ name for this year and Blake Shelton, Maren Morris are among them. Taylor Swift to Perform 'Betty' on 55th ACM Awards Marking Her First Country Show Performance in Seven Years.

The 55th ACM Awards is being hosted by Keith Urban. The names of the presenters were announced two days before this gala event. The show also saw some spectacular performances and among the performers Taylor Swift was also one of them. It marks her return to the ACM stage for the first time in seven years. Also, it’s the first time in the history of ACM Awards there’s a tie in the Entertainer of the Year category. Let’s take a look at the winners of the 55th Academy of Country Music Awards.

Entertainer of the Year (tie) - Thomas Rhett and Carrie Underwood

How lucky are we! This year we have not one, but TWO winners for Entertainer of the Year. Congratulations to @ThomasRhett and @CarrieUnderwood! #ACMawards pic.twitter.com/txKWXIiwmW

And the ACM Award for Female Artist Of The Year goes to @MarenMorris! ✨ #ACMawards pic.twitter.com/SOJZgbUGXc

And the ACM Award for Male Artist Of The Year goes to @LukeCombs! ✨ #ACMawards pic.twitter.com/bTfoR85pyi

Group of the Year - Old Dominion

thank you all so much for this ❤️ pic.twitter.com/am9uCZYae0

Single of the Year – Blake Shelton for “God’s Country”

"God's Country" is the ACM Single of the Year! Congratulations to @BlakeShelton! ✨ #ACMawards pic.twitter.com/7zuM1wvccr

This year's ACM New Female Artist Of The Year Winner, @tenilletownes gave us a heartwarming performance from the @theryman. Don't miss any more of the show and turn on @CBS or @CBSAllAccess! #ACMawards pic.twitter.com/2xUcyjcPuv

Songwriter of the Year - Hillary Lindsey

Video of the Year – Thomas Rhett for “Remember You Young”

Heartiest congratulations to all for winning big at the 55th Academy of Country Music Awards!

(The above story first appeared on LatestLY on Sep 17, 2020 09:04 AM IST. For more news and updates on politics, world, sports, entertainment and lifestyle, log on to our website latestly.com).