A Quiet Place Part II: 5 Terrific Moments From the First Film, Starring Emily Blunt and John Krasinski, That We Expect the Sequel to Top (Watch Videos)

Both the films were directed by actor John Krasinski, who also starred in them, while Emily Blunt, John's real-life spouse, also played the lead. In celebration of the release of A Quiet Place Part II, we are taking a look at five of the best moments from the first film. 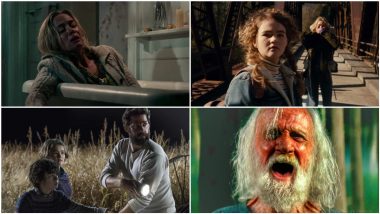 A Quiet Place Part II: 5 Terrific Moments From the First Film That We Expect the Sequel to Top! (Photo Credit: File Image)

After a series of delays, A Quiet Place Part II is finally hitting theatres in the US and other international markets this Friday. The reviews are in and the movie has been getting positive response from the critics, with many calling it a worthy successor to A Quiet Place. Some even saying it being better than the previous film as well. This is great to know as it solidifies that the long wait for this movie will be worth it. A Quiet Place Part II Review: John Krasinski and Emily Blunt’s Horror Film Makes a Positive Impression on Critics!

Both the films were directed by actor John Krasinski, who also starred in them, while Emily Blunt, John's real-life spouse, also played the lead. In celebration of the release of A Quiet Place Part II, we are taking a look at five of the best moments from the first film.

At the beginning of the film you’re introduced to the family that you’ll be following around the film. You see them quietly walk around the drug store grabbing supplies, while their youngest child grabs a toy rocket. Walking back home through a bridge, the child immediately activates the toy which makes a lot of noise, and here you see the aliens for the first time as Lee runs to save his son but is too late in doing so as the alien quickly grabs Beau. This sets the tone for the film and shows the threat that our protagonists will be facing.

As Lee and Marcus traverse back home after their scavenging expedition, they are met by an old man who’s seen grieving the death of his wife. After staring at each other Lee quickly realizes what’s about to happen and carries Marcus and runs away as the old man lets out a loud scream attracting the aliens which results in his immediate death. A Quiet Place Part II: 5 Films To Watch Before John Krasinski and Emily Blunt’s Upcoming Horror Flick.

Trapped in the Silo

After Marcus suddenly falls into the silo after standing atop of it, Regan quickly jumps down to help him as they are suddenly tasked with surviving this new problem. It creates for a really tense scene as you have to see these kids try to escape their deaths while the threat of the aliens still looms over them.

Evelyn, who is pregnant, suddenly finds herself in a problem as one of the aliens enters her home and she has to try to evade it. While doing so she goes into labor as well, and quickly goes into the bathroom and lies down in the bathtub as she is forced to mask her pain in order to survive. The viewer is quickly met with relief as Lee realizes that something is wrong and quickly sets off the fireworks to grab the aliens' attention, as Evelyn finally leaves off a loud scream and safely gives birth to her child.

In an effort to get the aliens to back off from the car that his children are hiding in, Lee quickly realizes that in order to save them he has to sacrifice himself, and so he does. In a final goodbye, he signs to Regan saying that he “Always loved her” and lets out a scream attracting the aliens' attention as the children escape, and Lee sacrifices himself as the children and Evelyn watch in horror.

(The above story first appeared on LatestLY on May 25, 2021 07:59 PM IST. For more news and updates on politics, world, sports, entertainment and lifestyle, log on to our website latestly.com).