A Quiet Place was released back in 2018 and was lauded for its unique concept where the monsters attack people if they make a sound. The premise was never seen before in a horror film and created for a really tense movie. It follows a family as they try to survive daily in this post-apocalyptic world. 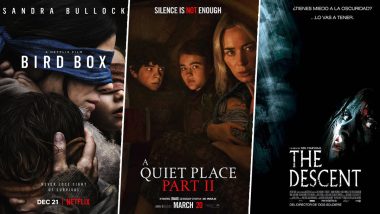 A Quiet Place, directed by John Krasinski starring him and his spouse Emily Blunt in the lead, was released back in 2018 and was lauded for its unique concept where the monsters attack people on the basis of sound. The premise was a rarely explored idea in a horror film and it helped to create for a really tense movie. A Quiet Place followed a family as they try to survive daily in this post-apocalyptic world. The movie was not only scary, but was surprisingly emotional as well, and later turned out to be a critical and commercial success. To no one’s surprise a sequel was immediately greenlit following the success of A Quiet Place. A Quiet Place Part II Review: John Krasinski and Emily Blunt’s Horror Film Makes a Positive Impression on Critics!

After many delays due to the ongoing COVID-19 pandemic, A Quiet Place Part II finally hits the big screens this Friday in international markets. The story immediately picks up at the end of the first film and the entire cast comes back again, this time being joined by newcomers Cillian Murphy and Djimon Hounsou. So before A Quiet Place Part II hits theatre, you can check out these five films with a similar premise to A Quiet Place:

This 2018 Netflix post-apocalyptic thriller follows the character of Malorie Hayes, played by Sandra Bullock, as she tries to protect herself and two children from entities which push people who look at them to commit suicide. In the majority of the film we see our characters wear a blindfold in order to survive which creates a tense atmosphere and works as a really fun premise of a horror film.

This found-footage horror film follows a group of people through New York as they are caught by surprise by a giant monster attacking the city. Following footsteps in the reigns of monsters like Godzilla, Cloverfield itself has a great design that helps it maintain its own identity and has been a major inspiration for a lot of monsters following its release. A Quiet Place Part II Trailer: Scares Keep Coming in As Emily Blunt Protects Her Family From Terrors Outside (Watch Video).

This 2005 British horror film directed by Neil Marshall follows six women who enters a cave system and struggle to survive as they are quickly attacked by humanoid creatures. The film is brutal and scary as it contains many terrifying scenes and the monster design itself is very threatening when up on the screen.

This 2016 horror-thriller directed by Fede Alvarez follows three robbers who break into an old blind man’s house and immediately get trapped in it. The twist being that the blind man is actually very skilled in combat and can take down people very easily, this creates for a nice stalker type element in the film and creates for some great thrills.

Talking about standard setting horror films, Ridley Scott’s classic Alien sure comes to mind. It follows the commercial space tug Nostromo, who encounters a mysterious alien, which is set loose on the ship and goes around killing the entire crew. The design of the alien itself is very iconic and set the standards for stalker monsters in films going forward.

(The above story first appeared on LatestLY on May 25, 2021 11:01 AM IST. For more news and updates on politics, world, sports, entertainment and lifestyle, log on to our website latestly.com).