Abigail Breslin Birthday: 5 Best Movies of the Actress to Watch On Her Special Day

As Abigail Breslin gets ready to cut her birthday cake this year, we look at five of her career-best performances so far. 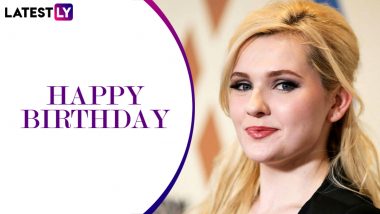 Abigail Breslin, the child star of Hollywood and now an actress celebrates her birthday on April 14. She started very young in the industry and has managed to navigate through its tough waters. Breslin has already managed to rub her shoulders with some of Hollywood's A-listers like Ryan Reynolds, Meryl Streep, Julia Roberts and Woody Harrelson amongst others and continues with her journey even today. To know which movies we are talking about and how brilliant she was as a child artist, check out the list below. Zombieland: Double Tap Movie Review - Jesse Eisenberg, Emma Stone's Gory Horror-Comedy Is Only Fun If You've Got The Thrills For Zombies.

As Abigail gets ready to cut her birthday cake this year, we look at five of her career-best performances so far.

Okay, this was really a good and fun movie whose success probably prompted the makers to plan a sequel. As the name suggests, the movie revolves around a zombie apocalypse where Abigail and Emma Stone are sisters who team up with Woody Harrelson and Jesse Eisenberg to survive the zombie attack.

A sweet family drama that revolves around a family who's trying to reach from one end of the country to another so that their child can participate in a beauty pageant. The movie was really heartwarming and Abigail was certainly its most adorable element.

Abigail was really lucky to share the screen space with stalwarts like Meryl Streep and Julia Roberts at such a young age. In here she plays Roberts' daughter who attends a dysfunctional family reunion and while things are a bit crazy, the movie is emotional at its core.

SRK and his daughter Anjali from Kuck Kuch Hota Hai of some sorts! Ryan Reynolds plays her father in this movie who discusses his three relationships with his daughter. He plays a game wherein he asks his daughter to guess who her mother was, post his narration. A simple romantic drama filled with one too many cutesy moments.

It took ten years for the makers to plan this sequel and Abigail was visibly grown up by then. She reprised her character along with Emma Stone, Jesse Eisenberg and Woody Harrelson but her character sketch undergoes a bit of a change. Now she's more like a rebel who's voicing her mind against her elder sister. But they still fight zombies, though!

(The above story first appeared on LatestLY on Apr 14, 2021 09:00 AM IST. For more news and updates on politics, world, sports, entertainment and lifestyle, log on to our website latestly.com).