The makers of Annabelle Comes Home drops the scariest trailer that you may have ever seen. Watch it now! 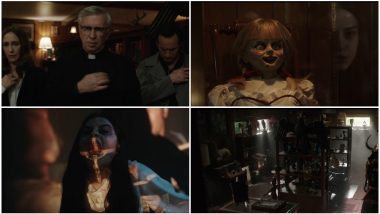 Annabelle Comes Home director Gary Dauberman had already warned that this time, the story revolving around the demonic doll Annabelle is going to be the scariest one. It is going to haunt the Warrens’ life like never before. And the trailer which has been released, shows how the haunted artifact room turns the Warrens’ lives into a nightmare. The makers have dropped the trailer, the third series in the Annabelle franchise. Annabelle Comes Home Poster: James Van Releases the First Look of the Demonic Doll – See Pic.

This time the plot is centered on the doll Annabelle. It is not going to be any cameo appearance but it is fully focused on it and the trailer has shown it all. The trailer of Annabelle Comes Home shows how the husband and wife duo Ed Warren and Lorraine Warren try to safeguard their daughter Judy and her friends. When the young girls enters the haunted artifact room and what happened next, showed the ride is going to get scarier. Annabelle Comes Home Teaser: Warner Bros Announces the Sixth Installment in The Conjuring Universe Franchise (Watch Video).

Watch the trailer of Annabelle Comes Home below:

The film’s official synopsis read, “Determined to keep Annabelle from wreaking more havoc, demonologists Ed and Lorraine Warren bring the possessed doll to the locked artifacts room in their home, placing her “safely” behind sacred glass and enlisting a priest’s holy blessing. But an unholy night of horror awaits as Annabelle awakens the evil spirits in the room, who all set their sights on a new target—the Warrens’ ten-year-old daughter, Judy, and her friends.”

Annabelle Comes Home is all set to release on June 28 in English, Hindi, Tamil and Telugu in India. It is the sixth installment in The Conjuring Universe series. So do let us know your thoughts on this trailer in the comments section below.

(The above story first appeared on LatestLY on Mar 31, 2019 10:06 AM IST. For more news and updates on politics, world, sports, entertainment and lifestyle, log on to our website latestly.com).