Huma Qureshi made her Hollywood debut with Zack Snyder's Army Of The Dead but her screen time was mercilessly short. Fans were quite upset to see the way her character was left in limbo as many couldn't figure out what became of her towards the end. We do have a possible explanation of the same. 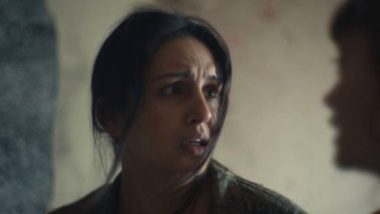 Huma Qureshi In Army Of The Dead (Photo credit: Twitter)

Zack Snyder's Army Of The Dead is streaming on Netflix since yesterday. We told you how Indians were upset to see Huma Qureshi's role being snipped short mercilessly. Many made their displeasure apparent on Twitter. Some were amazed to see her in the film, others couldn't she was given such a raw deal for her maiden Hollywood film. In fact, her character is so strangely edited in the film that nobody knows what really happened to Geeta. Screenrant however has a speculative explanation of the same.  Entertainment News | ‘Army of the Dead’: Zack Snyder, Netflix Spent Millions to Add Tig Notaro in Film

The helicopter which Tig Notaro's character flew in the film got into an accident and a side of it was damaged. It is implied that Geeta who sat in the front seat died in the same. Screenrant believes the reason it wasn't kept in the movie was that Notaro wasn't the original actor cast in the role. It was Chris D'Elia. But a sexual misconduct allegation later, he was replaced by Tig and her shots were all done on Green screen. They were later jammed with the other characters through CGI. It is a possibility that all scenes of Huma in the helicopter may have had D'Elia in the frame and had to be cut out. Army Of The Dead: Huma Qureshi’s Limited Screen Time In The Zack Snyder Netflix Film Leaves Fans Highly Disappointed

Well, if it's true, this is really unfortunate as Huma's scenes were chopped off due to a disgraced comedian.

(The above story first appeared on LatestLY on May 23, 2021 04:44 PM IST. For more news and updates on politics, world, sports, entertainment and lifestyle, log on to our website latestly.com).