Avatar Overtake Avengers: Endgame to Become the Highest-Grossing Movie of All Time

Avatar had collected USD 2,789.7 million and had become the highest-grossing film in 2009. The titled them went to Russo Brothers-directed Marvel movie when it gained a USD 7 million edge over it with a collection of USD 2,797.5. 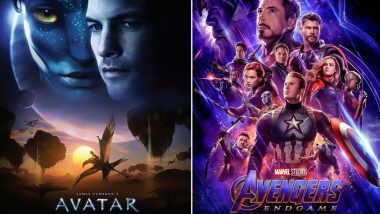 Its time for some serious business. With everything slowly coming back on track, films have also found their way to the theatres. Avatar, the epic science-fiction film that released back in 2009, has also been re-released in theatres in China and it is doing wonders at the box office. James Cameron’s film was re-released on March 12 and has broken Avengers: Endgame box office record. Avenger: Endgame was the highest-grossing movie of all time and now Avatar will be bearing that title once again. Marvel’s Avengers: EndGame Beats Avatar to Be Highest Grossing Movie of All Time, Russo Brothers Thanks ‘The Greatest Fans in the Universe’.

Avatar had collected USD 2,789.7 million and had become the highest-grossing film in 2009. The titled them went to Russo Brothers-directed Marvel movie when it gained a USD 7 million edge over it with a collection of USD 2,797.5. Now after 18 months of the release of Endgame, Cameron's film has once again bounced back to reclaim that title. The film has grossed $3.22 Million making its total to a sum of $2.7926 Billion while Avengers: Endgame was leading the game at $2.7902 Billion earlier.

Avatar had earlier surpassed the former global box office champ, Jim Cameron’s 1997 Titanic collection after being released in 2009. The movie held that title for ten years until Avengers: Endgame was released. The superhero film that united many superheroes like Peter Parker/Spider-Man, Doctor Strange, T’Challa/Black Panther and Peter Quill/Star-Lord among others, received fervent critical reviews. The film had also earned a 94 per cent rating on Rotten Tomatoes, the highest for any Avengers film. Avengers: Endgame Worldwide Box Office Collections: Marvel Film Crosses $2.6 Billion, Needs THIS Much More to Beat Avatar.

Meanwhile, Cameron has been busy with the sequels. The cast returned to production last May in New Zealand on part 2 as Covid cases calmed in the country. Disney has scheduled Avatar 2 for Dec. 16, 2022; part 3 for Dec. 20, 2024; part 4 for Dec. 18, 2026; and part five for Dec. 22, 2028. Avatar revolved around the story of humans invading a moon of the gas giant Polyphemus called Pandora. The place is populated by a community of humanoids called Na’Vi, an amicable, blue-hued species. Humans enter their planet to mine the valuable mineral called Unobtanium.

(The above story first appeared on LatestLY on Mar 13, 2021 12:16 PM IST. For more news and updates on politics, world, sports, entertainment and lifestyle, log on to our website latestly.com).