Avengers: Endgame Beats Star Wars: The Force Awakens for the Most Number of Pre-Sales in a 24 hour Period

Avengers Endgame is already busy breaking some old records and making new ones. 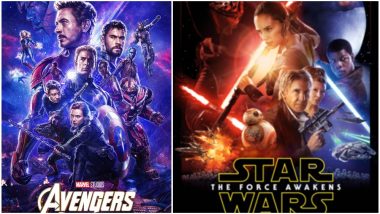 Avengers: Endgame is barely 23 days away from its big release and fans all over the world are trying hard to kill this long wait. Marvel's crossover movie is already busy creating different records, starting with their pre-sale tickets. The advance booking for this Infinity War sequel opened yesterday morning in the US and excited fans were quick enough to secure their place. As per a report in Complex, many fans were forced to wait in a queue, and in some cases, ticketing sites crashed, while they tried to purchase the tickets. The enthusiasm was at an all-time high and the film was able to successfully beat the record of Star Wars: The Force Awakens that released in 2015. Avengers EndGame Director Joe Russo Reveals His Favourite Marvel Superhero and It Is Neither Iron Man nor Captain America.

Check out the new promo of Avengers: Endgame

As per Fandango, within six hours Endgame broke the record for most pre-sales in a 24-hour period, set by Star Wars: The Force Awakens in 2015. Now that's a huge feat for Marvel and such great beginnings pave way for an equally great future. Interestingly all the top five movies ranking in the pre-sales record belong to Disney's Marvel or Star Wars franchise. Avengers EndGame Runtime LEAKED; at Over 3 Hours, It Becomes Marvel’s Longest Film.

#AvengersEndgame gave The Force Awakens the *snap* as the top-selling pre-sale title in the first 24 hours.

(notice the perfect balance of the top 5?) pic.twitter.com/BwYAOQekf3

Marvel took to its Twitter account to announce the big news with a new promo release. The promo delved deeper into their personal equations and how they assemble together to fight the Mad Titan. The movie will bid adieu to many prominent characters and if they will die or move on with their life is yet to be seen. Start the countdown for the film hits the big screen on April 26.

(The above story first appeared on LatestLY on Apr 03, 2019 08:47 AM IST. For more news and updates on politics, world, sports, entertainment and lifestyle, log on to our website latestly.com).