Before Doctor Strange in the Multiverse of Madness, 10 MCU Movies That Trolled Marvel Fans With Their End-Credits Scenes (Watch Videos)

Marvel is quite well known for trolling their fans with end-credits scene like the one in Doctor Strange in the Multiverse of Madness. So, let’s explore 10 other instances where they trolled their fans at the end of the film. 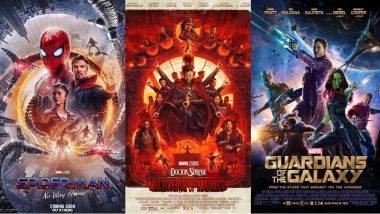 The post-credits scene of Doctor Strange in the Multiverse of Madness featured Bruce Campbell’s Pizza Poppa finally stop punching himself and him looking to the screen and saying “It’s over!” The scene was quite funny and essentially trolled people expecting some huge set up. Marvel is quite well known for trolling their fans with end-credits scene like these. So, let’s explore 10 other instances where they trolled their fans at the end of the film. Doctor Strange in the Multiverse of Madness Movie Review: Benedict Cumberbatch’s Marvel Film Revels in Sam Raimi’s Horror Vibes and Elizabeth Olsen’s Scarlet Witch Act (LatestLY Exclusive).

Ant-Man and the Wasp

The sequel to Ant-Man ended on quite the dramatic note as the end-credits scene tied into Avengers: Infinity War, although the second one was quite fun. It ends with a giant ant playing some drums.

Guardians of the Galaxy

The first Guardians of the Galaxy had two post-credit scenes that were played off as jokes. The first being the dance of baby Groot, but the audiences expected the second one to set up something huge. Rather, we got a scene with Howard the Duck and Cosmo the dog.

The sequel to Thor again featured a hilarious post-credits scene. After we see Thor return to Earth and embraces Jane Foster, in the background we can see a flock of birds trying to escape a Frost Beast.

Thor: Ragnarok was another film that ended on quite the ominous tone while the second end-credit scene was just played for laughs. Featuring the Grandmaster as he declares the revolution of Sakaar a draw, it was hilarious seeing knowing that at least Jeff Goldblum survives.

Now many people might be thinking that why would this entry be a troll? Well, before the release of the film Marvel apparently made it clear that the film wouldn’t have any post-credits scene. Now that didn’t turn out to be true as Thanos literally shows up out of nowhere and puts on the Infinity Gauntlet.

Captain Marvel set quite a tease for Avengers: Endgame, but its second end-credits scene was hilarious and cute. It featured the alien cat Goose, who jumped around in Nick Fury’s office and spits out the Tesseract.

In Venom: Let There Be Carnage, we see Tom Hardy’s Eddie Brock transported into the MCU, only for Spider-Man: No Way Home to throw him out of it again in like five minutes. While it does set up a symbiote storyline, it was hilarious to see Marvel play with fans expectations who though Tom Hardy would be a part of the Marvel Cinematic Universe.

Iron Man 3 featured a major cameo from Mark Ruffalo who returned to portray Bruce Banner here. Instead of setting up a future film, he is just there listening to Tony recite the events of the movie, only thing being that he was asleep for the majority of it.

After the great and crow pleasing Thanos tease, Marvel trolled its fans by paying off a joke that was set up at the end of the film. There is just something so calming about watching the Earth’s Mightiest Heroes sitting in a restaurant and enjoying some shawarma.

To finish off the list we are taking the post-credit scene that had the best troll of them all. The post-credits scene features Captain America come on the screen and talk to the audience about patience. This was the first Marvel has been meta about the movie ending, and it worked extremely well.

(The above story first appeared on LatestLY on May 10, 2022 06:03 PM IST. For more news and updates on politics, world, sports, entertainment and lifestyle, log on to our website latestly.com).