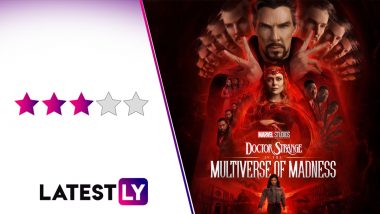 Doctor Strange in the Multiverse of Madness Movie Review: Sam Raimi directing a MCU movie is like the collision of two phases of my movie-geeking life, and perhaps for many other '90s nerds like me. Sam Raimi, of course, terrified the shite out of my childhood with his Evil Dead movies, before he made me a comicbook movie fan with his Spider-Man movies. Marvel has captured a big chunk of my adulthood with its 20-something, and never-gonna-end-it-seems, movie franchise. So Sam Raimi directing Doctor Strange in the Multiverse of Madness is definitely a huge thing for me. Doctor Strange in the Multiverse of Madness: Leaked Movie Stills From Grand Premiere Go Viral; Marvel Fans Ask Viewers Not to Post SPOILERS from Benedict Cumberbatch-Elizabeth Olsen's Film.

While I was very much excited for the promise of the many cameos (more on this later), I was even more excited to see if Raimi can deliver something on the same excellence as Spider-Man 2 with Doctor Strange 2. The good news here is Doctor Strange in the Multiverse of Madness is very much a Sam Raimi movie, that enjoys the violent excesses he brings in (remember the operating theatre scene in Spider-Man 2?). The bad news is, his magic is trapped within the Universe of MCU, and thereby he is loaded off with a script that is quite rocky from the very beginning.

Doctor Strange in the Multiverse of Madness begins with our titular hero (Benedict Cumberbatch) waking up from a nightmare, that involves a variant of him with a ponytail and a girl called America Chavez (Xochitl Gomez) being chased by a monstrous entity, and that variant being killed. Only that his nightmare isn't a nightmare, and in fact, America jumps to his universe chased by a one-eyed octopus.

Doctor Strange takes her under his protection, and finds out that she has powers to travel through different dimensions. To help her out, Strange seeks the help of Wanda Maximoff (Elizabeth Olsen), only that Wanda has her own sinister plans to do with America, resulting in a brutal and violent face-off between the two, and their variants, through a few multiverses.

Since Avengers: Endgame happened, the MCU has gone weirder. I am not saying in a Doctor Strange and a Sam Raimi kind of weird. It's just that earlier we only need to follow the previous movies of the franchise to enjoy their latest installment. But now, we also have to follow their Disney+ series, and even the non Disney+ ones for the sake of continuation and fan-servicing. Doctor Strange In The Multiverse Of Madness Star Benedict Cumberbatch Says Shah Rukh Khan Will Make A ‘Great’ Addition To The Marvel Cinematic Universe.

But it doesn't end there. Thanks to Spider-Man: No Way Home, we now also need to recall the other Marvel movies that don't come in the MCU canon. For Doctor Strange in the Multiverse of Madness, all the above apply, plus it is an added advantage if you have some comicbook knowledge too. Like, who the eff is that Minotaur at Kamar-Taj, and why the eff does no one hardly care that there is a half-man half-bull amidst them? This veering away from the groundedness of the previous three phases of MCU - despite the purple Bruce Willis-looking aliens, talking raccoons and sentient trees - has been quite jarring for me, but that's my personal grudge.

Still, I was willing to keep away my issues with MCU's new phase, to enjoy the madness Raimi is bringing to the plate. Thankfully, Doctor Strange in the Multiverse of Madness is enjoyable the best, when the movie goes full Raimi. You would be surprised to see how he manages to echo his previous horror work here, be it his Evil Dead movies or his underrated Drag Me to Hell. Eye-gouging, skull-crushing, zombie stuff, macabre body movements, brutal bloody kills, the basement trap lure, evil books, good jump-scares - some of Raimi's potent trademarks are here. And, did I forget Bruce Campbell hitting himself?

Despite the mild rating, Raimi makes Doctor Strange 2 quite violent and horrifying. The movie is most gripping when it goes dark and allows the Scarlet Witch to go darker. Or in movie-geek terms, DSITMOM goes full nuts with Scarlet Witch goes full Carrie-mode. Sam Raimi Birthday Special: From The Evil Dead to Spider-Man, 5 of the Cult Director’s Most Iconic Films.

He also conjures some very eye-catching, and occasionally visceral imagery, like the sequence where Doctor Strange and America traverse through multiple universes, including one where they are all cubes, and one where they are all wet-paint. However, the CGI isn't all flawless. Certain visuals felt something out of a Spy Kids movie, and in some cases, I could clearly decipher the green screens.

Not faulty, though, is the music score of Sam Raimi's favourite collaborator, Danny Elfman. Not wanting to spoil anything, but there is an awesome scene near the third act that has an imaginative use of Elfman's score along with some very exciting visuals. Also loved the musical cue played when Wanda first does the 'Dreamwalk'.

Now that I have fanboyed enough on Sam Raimi, let me talk about why Doctor Strange in the Multiverse of Darkness may not end up being among my fave movies of the director. The sequel is still an improvement on the original, and it rectifies a couple of problems the first Doctor Strange film had, like giving Rachel McAdams' Christine Palmer more to do (at the same time, it also puts Michael Stuhlbarg in only one scene, and that's a crime).

However, the movie is bogged down by a screenplay (Michael Waldron) that is quite uneven, often rushed and in parts, under-developed. Things happen on screen, but save for Wanda's yearning for her kids (it's imperative that you watch WandaVision to care for her arc, though), the emotional heft feels lacking. For example, the movie wants us to care for what Strange feels for Palmer, but unless you have watched their episode in What If? (the best episode of the series), it's hard to feel for the romance (a flaw of the first DS movie). That's said, I still liked the last scene between Strange and Palmer, which had both Cumberbatch and McAdams perform really well emotionally.

The movie also loses some points when it gets into MCU fan-servicing. Like that much-talked about Illuminati scene. While it has some nice cameos, they aren't used in a way like how No Way Home uses its guest stars. In fact, the biggest surprise cameo in that scene acted as if he is thinking about what to do with the huge paycheck Marvel is giving him.

I am not saying that the scene doesn't have some good points, but you can't help but feel it's fan-servicing done just to get the cheers from the viewers and nothing else. Also, like I said before, there are some very violent kills, but we don't really feel the emotional heft in the deaths, either because we don't know the characters that well or because they are simply variants. It is also hard to feel the tension when characters throw different coloured spells at each other, and we have no clue what they are supposed to do.

However, the performances are quite enjoyable. Benedict Cumberbatch relishes on bringing out  the various shades of his each variant, and I enjoyed watching him doing so. Benedict Wong is kick-ass! This is the best arc that has been given to his character. Xochitl Gomez is quite likeable as America, though her character is often treated the human macguffin of the film. Before Spider-Man: No Way Home, How Sam Raimi's Spider-Man 2 Connected Peter Parker, Doc Ock and Doctor Strange.

However, the standout performance is delivered none other than by Elizabeth Olsen. I wasn't a fan of her rushed Mad Queen-turn in the first act, that later turn into Carrie before it hibernates into a brutal Elsa in her mountain-top fortress. But Olsen totally knocks it out of the park with a portrayal that is anguished, evil, terrifying and yet sympathetic. She makes this movie feel like an epilogue of WandaVision, only with Doctor Strange added to it.

PS: Do keep your hopes restrained if you are watching Doctor Strange in the Multiverse of Madness only for the cameos. There are some star surprises (one dropping in the mid-credit scene), but please don't go in expecting to watch Tom Cruise whoop in as Superior Iron Man, or Deadpool break the fourth wall. That was some leaker's wishful dreaming.

- When The Movie Goes Full Sam-Raimi

- Lack of Emotional Heft in The Movie's Many Deaths

Doctor Strange in the Multiverse of Madness is a movie that is trapped between Sam Raimi's horror-world and MCU gimmickry. The movie is enjoyable thanks to its characters, Raimi's direction and its violent, maddening imagery. But the 'madness' feels very held-back when the screenplay leaves you indifferent to certain events and what happens to some of the characters.

(The above story first appeared on LatestLY on May 05, 2022 12:21 AM IST. For more news and updates on politics, world, sports, entertainment and lifestyle, log on to our website latestly.com).