With Black Widow having its international release last week, plot points from the film have started to leak. With many rumours before release talking about how Black Widow would play out, fans had a lot of excitement going in. Here, take a look how the many rumours ar busted. 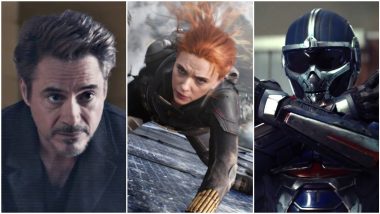 Black Widow just had its release on July 9 after a year-long worth of delays. The movie sees the return of Scarlett Johansson in the final appearance of the titular character and follows her journey between Captain America: Civil War and Avengers: Infinity War. It sees Natasha Romanoff on the run and how she has to confront a conspiracy that is tied to her past. She is joined by Yelena Belova played by Florence Pough, The Red Guardian played by David Harbour and Melina Vostokoff played by Rachel Weisz. Black Widow Box Office Collection: Scarlett Johansson's Marvel Movie Beats F9; Earns $80 Mn In North America In The Opening Weekend.

With Black Widow having its international release last week, plot points from the film have started to leak. With many rumours before release talking about how Black Widow would play out, fans had a lot of excitement going in. While some of them did come to be true, there were a lot of these rumours that ended up going nowhere. Black Widow: Scarlett Johansson and Team Talk About How the Film Will Be More Than Just Action Scenes (Watch Video).

So today we are taking a look at five pre-release rumours that Black Widow busted. (SPOILERS Ahead)

Melina Vostokoff, in the comics, is one of Black Widow’s biggest enemies. There were many rumours before the release of the film that Melina would betray the team and don the mantle of Iron Maiden. According to those who have seen the movie, nothing of that sort happens. Melina is loyal to Natasha and her “family” throughout the movie and never goes against them.

Many fans suspected that O-T Fagbenle would end up being Toni Masters/Taskmaster due to how little of a presence he had in the marketing, but that didn’t seem to be the case. His character Mason just ended up being an ally of Natasha from SHIELD who would provide her with supplies. The Taskmaster ended up being Antonia Dreykov who was played by Olga Kurylenko.

Setup for the Thunderbolts

With how the Marvel Cinematic Universe has been introducing its villains, many thought that we would get a setup for the Thunderbolts in Black Widow. With characters like Melina, Thaddeus Ross and Taskmaster being present, and Marvel bringing back Zemo and introducing US Agent, it felt like the Thunderbolts would finally get their time to shine. But that didn’t seem to be the case, as Thaddeus Ross hardly has that big of a role in the movie. Hopefully down the road, we do get a project based on the Thunderbolts.

Black Widow finally answers the age-long question of what happened in Budapest. It involved Natasha and Clint Barton taking down Dreykov by blowing up the building he was in and escaping the authorities. Many expected Hawkeye to show up in the flashback concerning Budapest, but according to those who have seen the movie, he just has a cameo as a voice-over-the-coms and a picture of his scene in the film's much-talked about post-credit scene.

During the filming of Black Widow, there were reports flying around that Robert Downey Jr would have his final appearance as Tony Stark in Black Widow. The reports said that a cut scene from Captain America: Civil War would be put into the film, which involved Tony telling Natasha to go on the run and help Steve Rogers. While the filmmakers did say that there was a plan to put in the scene, they ultimately decided against it. Black Widow: Is Robert Downey Jr Making a Cameo in Scarlett Johansson’s Film? Here’s What We Know!

PS - Black Widow still has no planned release date in India. All the above-mentioned plot points were taken from the fans who have already seen the film and put their thoughts on social media.

(The above story first appeared on LatestLY on Jul 12, 2021 08:31 PM IST. For more news and updates on politics, world, sports, entertainment and lifestyle, log on to our website latestly.com).