Chris Pratt in the last few years went from being a small television actor to a Hollywood leading man. Pratt originally hopped on to the scene with playing the role of Andy Dwyer in Parks and Recreation and then received worldwide fame after he starred in Marvel’s Guardians of the Galaxy. 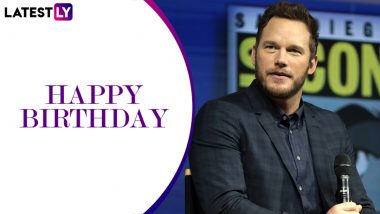 Chris Pratt in the last few years went from being a small television actor to a Hollywood leading man. Pratt originally hopped on to the scene with playing the role of Andy Dwyer in Parks and Recreation and then received worldwide fame after he starred in Marvel’s Guardians of the Galaxy. From fighting bad guys in space to riding his bike alongside Velociraptors, Pratt has become a huge box office draw as any release with him is met with an overwhelming amount of excitement. Chris Evans Birthday: Chris Hemsworth Puts Up a Selfie With Chris Pratt To Hilariously Wish the Marvel Star!

Ever since the release of Jurassic World Chris Pratt has had 6 films cross the $1 Billion mark, so with his 42nd birthday coming up we are ranking his top five films based on their box office performances. Aside:Chris Pratt Shares Hilarious Pictures of His Wife Katherine Schwarzenegger As He Pens Down an Emotional Anniversary Note for Her.

Pratt returned to play Star Lord in the sequel, as did the entire lead cast from the previous film. Guardians of the Galaxy Vol 2 followed the group as Quill reunited with his father, Ego the Planet, played by Kurt Russell. His chemistry with Yondu played by Michael Rooker was also the highlight of the film as it brought their story to a satisfying conclusion. Vol 2 did better than the first film at the box office as it went on to gross over $863.8 Million.

With the two leads of Jurassic World returning and JA Bayona at the director’s chair, Fallen Kingdom tells the story of Owen Grady and Claire Dearing having to rescue the dinosaurs off the Isla Nublar island as their existence is threatened by a volcano. It went on to receive mixed reviews as critics took issue with its convoluted and tonally inconsistent story. It still managed to do good at the box office as it crossed the $1 Billion mark rather effortlessly.

This reboot of the classic Jurassic Park series sees Colin Trevorrow at the director helm and Pratt plays the role of Owen Grady, who trains Velociraptors at the park, while he is joined by Claire Dearing played Bryce Dallas Howard. Everything goes wrong as the dinosaur hybrid Indominus Rex gets loose in the park, it sees our leads having to take the hybrid down in order to save the park. Jurassic World did amazing at the box office as it raked in $1.670 billion worldwide.

Marvel’s biggest crossover yet as the Guardians joined the Avengers to stop Thanos from wiping out half of the universe. Pratt’s chemistry especially with Robert Downey Jr.’s Tony Stark and Tom Holland’s Spider-Man was appreciated a lot by critics as they created a great comedy dynamic. Avengers: Infinity War went on to gross over $2.048 Billion at the box office.

A culmination of MCU’s Infinity Saga, Endgame picked up right after the ending of Infinity War as the Avengers had to try and reverse the damage done by Thanos. With Star Lord being one of the dusted, his return at the end was one of the highlights of the film along with all the other Avengers returning. It set up his and the Guardians’ future up with Thor as they are now slated to appear next in Thor: Love and Thunder. Avengers: Endgame went on to gross over $2.798 Billion at the box office and became the highest grossing film of all time, before it was overtaken by James Cameron’s Avatar.

(The above story first appeared on LatestLY on Jun 21, 2021 10:41 AM IST. For more news and updates on politics, world, sports, entertainment and lifestyle, log on to our website latestly.com).