Christopher Nolan Birthday Special: From Inception to The Dark Knight, 5 Action Scenes From His Movies That Are Simply Awesome (Watch Videos)

Christopher Nolan makes great utilisation of practical effects and couples them up with minimal amounts of visual effects. This helps in making his action scenes feel more real and authentic which end up packing a great punch. 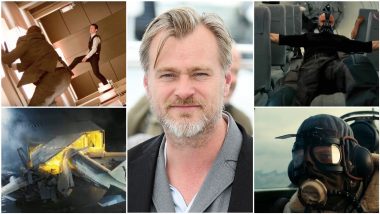 Christopher Nolan is arguably one of the best directors working today. All of Christopher Nolan’s films have pushed boundaries of what can be done with a great concept and how it can be utilized to its fullest potential. Nolan is known for coming up with great sci-fi concepts and directing some great action set pieces based around them. Christopher Nolan makes great utilisation of practical effects and couples them up with minimal amounts of visual effects. This helps in making his action scenes feel more real and authentic which end up packing a great punch. Christopher Nolan Birthday Special: Ranking All His Films From Worst to Best.

With how influential Nolan’s films have been, his action scenes have been equally impactful. With Christopher Nolan’s 51st birthday coming up, we are taking a look at five of his best action scenes from his films.

Tenet had no lack of big set pieces, but the one that impressed the most was the Airport sequence. It starts off with the Protagonist and Niel hatching a plan to steal a painting from the airport. In order to cause a big distraction, Nolan actually took a plane and crashed it. There were hardly any practical effects and it featured a fight scene that featured a character fighting completely in reverse. It was fun, it was big and it was amazing. TENET Movie Review: Christopher Nolan’s Latest Is a Spectacular Puzzle That’s Also a Numbing Head-Scratcher!

Inception in concept itself was a film that would leave you scratching your heads, but the hallway fight is a marvel to witness. It featured Arthur fighting goons in a dream while the entire hallway was having its gravitational force tilted because of a car chase taking place in the dream before it. It is hard to explain, but it’s a great scene.

Dunkirk was Nolan’s first stab at making a war film, and oh was it glorious. But the thing that stole the entire movie was the amazing dogfights it showcased. Nolan rigged cameras on the side of the planes to make the scene feel authentic, and it resulted in some of the best aerial scenes you will ever see in a film.

While many filmmakers would have opted to shoot such a sequence with CGI, Nolan opted to go with the practical route. In a chilling scene featuring the reveal of our big bad, Bane, Nolan created a fantastic opening to his conclusion of The Dark Knight Trilogy. It featured an airplane being suspended way up in the air and featured some really great stunts.

The Dark Knight was a turning point for comic book films, and for good reasons. This scene alone proves why the movie was such a success. From a scene featuring the Joker chasing Harvey Dent, to the reveal of the Batpod which is capped off by an amazing truck flip, this eight minute scene has it all.

Here’s our list for some of the best scenes from Christopher Nolan’s films and we wish him a really good happy birthday.

(The above story first appeared on LatestLY on Jul 30, 2021 09:41 AM IST. For more news and updates on politics, world, sports, entertainment and lifestyle, log on to our website latestly.com).