The Disney-owned studio had also dedicated a similar eulogy to Marvel Comics visionary Stan Lee. They had remodelled the Marvel Studios logo with the opening of Captain Marvel in 2019. 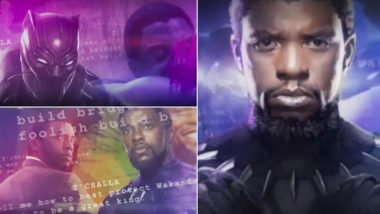 Chadwick Boseman's sudden demise was a shocker for everyone. The actor who had been suffering from cancer for a really long time succumbed to death in August 2020. The actor would have celebrated his 44th birthday today and we are sure all his fans are missing the king on this special occasion. RIP Chadwick Boseman: Last Tweet On Black Panther Actor's Twitter Account Becomes Most Liked Tweet With 6.1 Million Likes!

Chadwick Boseman's character T'Challa, the newly crowned king of Wakanda, was an immediate hit amongst the fans and the team at Disney believed that it was the perfect kind of tribute to give to the late actor. Disney+ has updated its Marvel Studios Logo with glimpses of his character from Black Panther in his honour.

The new logo is a commemorative update of the logo that has been used by Marvel Studios since 2016. Keeping the classic "flipbook" opening, one can see concept art images and extracts from the Black Panther script. Earlier, the standard intro had the footage of superheroes of the Marvel Cinematic Universe fill the letterforms but this tribute is dedicated uniquely and solely to Boseman.  The footage is taken from his roles in Captain America: Civil War, Black Panther, Avengers: Infinity War, and Avengers: Endgame.

Check Out The Logo Here:

Disney has updated the Marvel Studios intro for 'Black Panther' on Disney Plus in remembrance of the late Chadwick Boseman. Happy birthday, King. pic.twitter.com/2A9sJXLONy

On Saturday, Disney Chairman Robert Iger had tweeted a message to all Black Panther fans, telling them to watch the film on Disney+. He wrote, "To all fans of #BlackPanther: watch the film on #DisneyPlus late tonight, for a special tribute to someone that was and will always be near and dear to our hearts."

The Disney-owned studio had also dedicated a similar eulogy to Marvel Comics visionary Stan Lee. They had remodelled the Marvel Studios logo with the opening of Captain Marvel in 2019, the first MCU film released after his death in November 2018. Remembering Chadwick Boseman: Watch Robert Downey Jr and Chris Evans Welcome Black Panther Actor To MCU in This Throwback Video!

As for Black Panther 2, the film is happening and will star Letitia Wright, Danai Gurira, Lupita Nyong’o, Winston Duke, Martin Freeman, and Angela Bassett in key roles. The film is scheduled to open in theatres on May 6, 2022.

(The above story first appeared on LatestLY on Nov 29, 2020 04:21 PM IST. For more news and updates on politics, world, sports, entertainment and lifestyle, log on to our website latestly.com).