Doctor Strange in the Multiverse of Madness is scheduled to release on March 25, 2022 and will star Benedict Cumberbatch, Benedict Wong and Elizabeth Olsen while being directed by Sam Raimi. 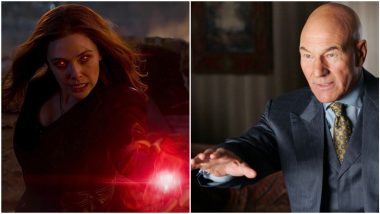 Doctor Strange in the Multiverse of Madness is all set for its release this March, and we know little to nothing about it aside from its cast. Starring Benedict Cumberbatch again in the role of Doctor Strange, the sequel seemingly will dive deep into the Multiversal aspect of the Marvel Universe. He will be joined by Elizabeth Olsen who will reprise her role as Wanda Maximoff/Scarlet Witch with many theorising her to be the main antagonist. What if…? Episode 4 Might Explain Doctor Strange’s Seemingly Reckless Behaviour in Spider-Man: No Way Home Trailer.

While of course we don’t have much info on the film, there have been rumours going around that we might get to see Professor X fight Wanda in the film. It looks like that rumour might be true after all.

Over the weekend we got a few leaks that showcased Wanda and Professor X fighting in a pre-vis version of their scene. For those who don’t know what previs is, it’s basically when companies make a concept in advance for how visuals of a particular scene should look. You can check the still in this Twitter post down below.

Now we really don’t know the legitimacy of these leaks, because nowadays anything is fakable, but for now we will give this the benefit of the doubt.

The news about Professor X being in Doctor Strange in the Multiverse of Madness was originally broken by the site Movie Scope.

After the news broke, many other leakers corroborated that we might see the debut of the Marvel group, The Illuminati. Many are also speculating that we might see the Patrick Stewart version of Professor X in the movie. Doctor Strange in WandaVision Updated Post-Credit Scene? Viral Video of Reddit User Leaves Marvel Fans Baffled!

Whether this news is true or fake, it surely does have us excited for the sequel and hones in on the Madness part of the title. But still we have to remember to take these leaks with a grain of salt.

Doctor Strange in the Multiverse of Madness is scheduled to release on March 25, 2022 and will star Benedict Cumberbatch, Benedict Wong and Elizabeth Olsen while being directed by Sam Raimi.

(The above story first appeared on LatestLY on Sep 27, 2021 08:37 PM IST. For more news and updates on politics, world, sports, entertainment and lifestyle, log on to our website latestly.com).