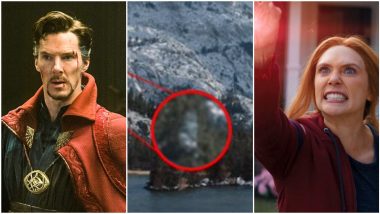 WandaVision wrapped up its run a couple of months back and was the first MCU Disney+ show. It impressed critics and fans with its impressive storyline and performances. With Wanda’s story leading into Doctor Strange in the Multiverse of Madness, many fans speculated Doctor Strange would make an appearance in the show. While there were plans laid out for the Sorcerer Supreme to make an appearance in the show, those plans ultimately fell through due to COVID-19. Or did it? WandaVision Finale Ending Explained: What Do the Two Post-Credit Scenes Mean for Elizabeth Olsen’s Scarlet Witch and Marvel Phase 4?

Last week a keen eyed Redditor noticed that the post-credit scene for WandaVision was updated to add a silhouette of a character. The original credit scene showed us Wanda living in the woods in a mountainous region while she was reading the Darkhold and we hear the voices of her lost children, Billy and Tommy. The updated credit scene remains the same, although now you can see a shadow as the camera pans towards Wanda’s cabin. You can check the video of the updated post-credit scene below:

u/ANotCoolGuy on reddit noticed a silhouette in an updated version of the post credits scene of the finale of #WandaVision. Also worth noting that composer Michael Gicchanno, who composed the first #DoctorStrange film is now in the credits of this episode 🤔 pic.twitter.com/8IifVFKqIw

What's more, they even included Doctor Strange composer Michael Giacchino's name in the credits, as you can see in the tweet below. This wasn't there before.

There are minor CGI changes in the altered scene. New post credits scene shows a silhouette flying over the mountains near Wanda's cabin. Also, Doctor Strange theme has been added into the music credits of Wanda Vision. What is Marvel upto? 👀 #WandaVision #DoctorStrange pic.twitter.com/XNEgikLViV

While we technically don’t have an answer to this question right now, our safest bet would that be of Doctor Strange. Since WandaVision leads Wanda’s story into Doctor Strange in the Multiverse of Madness it does seem like it might be him approaching Wanda’s cabin. It might be Vision too since he is able to turn himself translucent, and him approaching Wanda at the end would make a lot of sense. However, since the Doctor Strange composer has been added in the credits, our bets are on the Sorcerer Supreme. WandaVision Episode 9 Review: A Befitting but Predictable Finale for Elizabeth Olsen’s Disney+ Series That Gets Bogged Down by Fan Theories.

The most interesting part about this scene is how the shadow doesn’t change its size or shape as the camera zooms closer towards it, which can lead to the fact that the update might be unintentional. Although it’s still interesting that three months after the finale, Marvel would update a scene of WandaVision. Whatever the case might be over here, it has fueled our speculations for Doctor Strange in the Multiverse of Madness.

However, Indian fans might be disappointed with the fact that the WandaVision episode uploaded on Disney+ Hotstar continues to be the older version, hence you won't spot this 'change' there. Doctor Strange in the Multiverse of Madness is scheduled to release on March 22, 2022. Directed by Sam Raimi, the movie stars Benedict Cumberbatch, Elizabeth Olsen, Rachel McAdams, Chiwetel Ejiofor, and Xochitl Gomez.

(The above story first appeared on LatestLY on Jun 28, 2021 07:50 PM IST. For more news and updates on politics, world, sports, entertainment and lifestyle, log on to our website latestly.com).