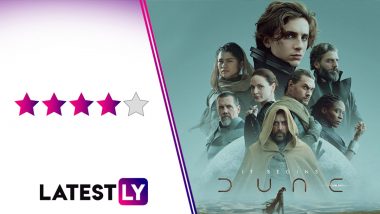 Dune Movie Review: I have been following Denis Villeneuve’s career for a while now and it has been really interesting to see how his career has evolved. Going from mastering thriller movies to now doing the same with sci-fi, has been nothing short of amazing. Dune is another beautiful and enthralling film crafted by him that will take you on a journey. Dune: Timothee Chalamet Opens Up About His Character in Denis Villeneuve’s Sci-Fi Epic.

So what was it like watching Dune? Well let me paint a scenario for you. Imagine being in a desert and trying to save your workers all the while the speakers in the theatre are giving off a rumbling sound as you start getting the feeling of danger being close. Suddenly the sand beneath your feet starts sinking as a 400 foot long sand worm devours the entirety of a spice harvester and our hero makes it off within an inch of his life all the while Hans Zimmer’s bombastic score is playing in the background. Yep, this is DUNE.

It’s without a doubt one of the best visual experiences I have had in the cinema. Greg Fraser’s cinematography fills up the screen as he captures beautiful wide shots that will leave you in awe. The visuals feel like concept art brought to life as it transports me to the sand filled world of Arrakis. Honestly the best visuals of any film I have seen this year, Dune definitely deserves to be seen on the biggest screen.

But of course, a movie is nothing without its story, so how was that? Well to put it in short, really good. Based on Frank Herbert’s novel of the same name, the film covers the first half of the novel. Dune tells us the story of Paul Atreides of house Atreides as a power struggle breaks out for the planet Arrakis. Think of Game of Thrones mixed in with really heavy sci-fi elements and you have Dune. The story is enthralling with rich world building that helps bring this sand filled world which in part feels like well, reading a novel. I appreciate that because we hardly get fleshed out heavy science fiction films with heavy themes.

Timothee Chalamet stars as Paul Atreides and the majority of the story is him learning who he is. There is a nice sense of progression to his character throughout the movie and doesn’t feel very clichéd to the “chosen one” concepts we have seen in other films. We also have other actors like Oscar Isaac, Josh Brolin, Jason Momoa and Stellan Skarsgard who are again amazing in the film. There was no single weak performance for me here, although the show is completely stolen by Rebecca Ferguson who portrays Lady Jessica, Paul’s mother.

Lady Jessica was quite the complex character who has other alliances other than House Atreides too and that puts her in a weird position. Thrusting her son into the same life too brings some great character drama that creates some really nice dynamic. I can’t wait to see where her character goes from here.

But, it’s not all perfect in the land of Arrakis. The film clocks near 155 minutes, but it certainly feels a lot longer than that. The pacing at times can take a massive hit and it just feels very slow, which is weird because Villeneuve’s films are usually very well paced. Sitting there in the theatre after Dune got over I certainly felt that I was in there for three hours only to know that it was 30 minutes less than what I thought. Dune Final Trailer: Denis Villeneuve’s Visual Spectacle Starring Timothée Chalamet Is Inviting You for an Experience of a Lifetime (Watch Video).

Some viewers might also feel that the film ends very abruptly. Considering that this is only the first half of the novel, they do choose a good place for it to end, but it felt like Dune just kept on building up to a third act that never came. This surely is kept for the sequel that we don’t know when it will come out.

Dune is a masterclass in visual filmmaking that brings the ideas of Frank Herbert’s to screen quite well. I really hope there is a sequel to this film because it will be quite sad if this story isn’t continued. But until then please watch Dune on the biggest screen possible.

(The above story first appeared on LatestLY on Oct 22, 2021 10:01 AM IST. For more news and updates on politics, world, sports, entertainment and lifestyle, log on to our website latestly.com).