Elton John was recently seen arriving at the Leipzig Airport in a wheelchair. The Sun ran an article referring to him as frail, to which he responded saying he is in top health and that he was only resting his hip after doing a show. 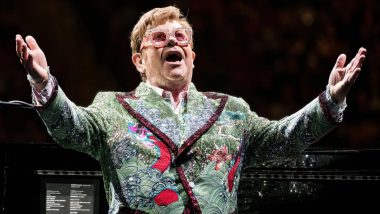 Legendary English singer Elton John said he is in top health ahead of his Platinum Jubilee concert performance. The 75-year-old "Rocketman" singer came out with the assurance after pictures of him being wheeled by a chaperone as he arrived at Leipzig Airport on Sunday, May 29 on the way back to his home in Nice on the Cote d'Azur, spread with The Sun running an article that referred to him as frail, reports aceshowbiz.com. Elton John Birthday: 5 Iconic Looks of the Legendary Singer That Are Just a Vibe in Itself.

"I want to thank all my fans for reaching out to ask about my health, after the tabloids ran a silly story about my looking frail in a wheelchair," John said in a long post on his Instagram feed.

"The true story is that I'm in top health, loving my shows and playing and singing at my very best. I give 100 percent every night and never want to disappoint, especially after everyone has waited so long to get back to seeing shows," he went on explaining.

"Your response to every show has been phenomenal and I'm loving every minute of it." The images that showed Gucci tracksuit-clad John climbing out of a car and into a wheelchair were taken after he had performed two shows in Frankfurt and Leipzig on his long-running Farewell Yellow Brick Road tour.

He added in his Instagram message: "After another rousing 2.5 hour show, we arrived at Leipzig airport just before curfew, to find part of the airport had closed."

"It was an extremely long walk to get to the plane, so my team kindly laid on a wheelchair so I could rest my hip after doing the show. That's all folks," he continued. Elton John’s Documentary ‘Goodbye Yellow Brick Road’ Lads Up at Disney+ for Hybrid Release.

"Last night was another blockbuster show in Bern and I'm looking forward to seeing everyone at this weekend's sold-out show in Milan. Thanks for all your kind words of support! Love, Elton xx."

John will appear in a pre-recorded performance for the Platinum Jubilee concert on Saturday evening, June 4 to celebrate Queen Elizabeth II's 70-year reign on the throne. Others set to to perform include Queen with Adam Lambert, Diana Ross and Rod Stewart. John's Farewell Yellow Brick Road tour is set to finally finish on July 8 in Stockholm, Sweden, after which the singer has vowed to retire from performing.

(The above story first appeared on LatestLY on Jun 03, 2022 03:30 PM IST. For more news and updates on politics, world, sports, entertainment and lifestyle, log on to our website latestly.com).