A Quiet Place Part II, directed by Krasinski and starring Emily Blunt in the lead, will be released in theatres and in IMAX countrywide. Produced by Michael Bay, Andrew Form, Brad Fuller and Krasinski, the movie also stars Cillian Murphy and Djimon Hounsou. 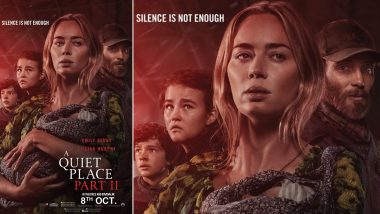 Mumbai, Sep 24: The second part in the horror thriller series A Quiet Place will finally release in India on October 8, Viacom18 Studios announced on Friday. A Quiet Place Part II: John Krasinski Talks About the Scene That Could Have Cost Him His Marriage to Emily Blunt.

A Quiet Place Part II, directed by Krasinski and starring Emily Blunt in the lead, will be released in theatres and in IMAX countrywide, Viacom18 Studios said in a statement.

A follow-up to 2018's A Quiet Place, the Paramount Pictures movie was originally scheduled to release worldwide in March 2018 but the studio postponed it due to the coronavirus pandemic. The film released in the US in May this year after being delayed several times.

Krasinski returned to direct the sequel from his own script, based on characters developed by Bryan Woods and Scott Beck.

A Quiet Place Part II begins almost immediately after the end of "A Quiet Place", and follows Evelyn Abbot (Blunt), her baby, and two older children Regan (Millicent Simmonds) and Marcus (Noah Jupe) as they try to survive in a world overrun by sound-sensitive creatures. A Quiet Place Part II: 5 Films To Watch Before John Krasinski and Emily Blunt’s Upcoming Horror Flick.