Cruella Sequel in the Works at Disney, Emma Stone May or May Not Reprise the Role

As per Variety, director Craig Gillespie and screenwriter Tony McNamara are expected to return for the sequel. However, it's currently unclear whether Stone will reprise her role as the dastardly, fur-loving villain, , but it's also unclear how a sequel would work without her. 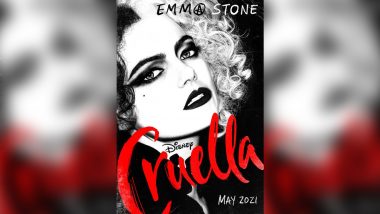 Seems like Disney isn't finished telling Cruella de Vil's story just yet! Before Emma Stone-starrer 'Cruella' has even entered its second weekend of release, Disney is already in early development on a sequel of the film. As per Variety, director Craig Gillespie and screenwriter Tony McNamara are expected to return for the sequel. However, it's currently unclear whether Stone will reprise her role as the dastardly, fur-loving villain, but it's also unclear how a sequel would work without her. The recently-released 'Cruella' stars Stone as fan-favourite '101 Dalmatians' villainess Cruella de Vil. Cruella Official Trailer 2: Emma Stone Is a Beautiful Badass Disney Villain as She Goes Against Emma Thompson’s Baroness.

Gillespie's live-action reimagining of the classic villain followed her origin story, decades before she wreaked havoc in Disney's animated '101 Dalmatians'.'Cruella' released on May 28 simultaneously in theatres and on Disney+ under the streaming service's Premier Access tier. The film has so far earned USD 48.5 million globally. It received positive reviews and has been praised for its 1970s punk rock aesthetic. Commenting on the success of 'Cruella', a Disney spokesperson said, "We are very pleased with 'Cruella's' box office success, in conjunction with its strong Disney Plus Premier Access performance to date." Cruella: Before Emma Stone’s Disney Movie Arrives, 5 Spinoff ‘Origin’ Movies We Enjoyed in the Past.

"The film has been incredibly well received by audiences around the world, with a 97 per cent Audience Score on Rotten Tomatoes in addition to A's in every demographic from CinemaScore on opening weekend, ranking it among the most popular of our live-action reimaginings. We look forward to a long run as audiences continue to enjoy this fantastic film," the spokesperson added.

In an interview with Collider on Monday, Gillespie hinted that he wasn't finished telling the villainess' story. "I feel like we've only just met her," the director said. He added, "I'd love to now see the full-blown Cruella, fully loaded.She's managed to get the support system around her and she can really expand on her brand. I'd love to see where that takes her and how you could almost destroy her from inside out, if she's not careful with all that power." On being asked if he was interested in returning to helm a potential sequel, Gillespie told the outlet that he would "if it was with this gang."

"It was such a joy to work with everybody, and Tony writing it, and Disney was so supportive. They really fostered a feeling of safety where we could just really go for it without the repercussions. We all were pushing it all the time and thinking, 'I don't know if Disney's gonna be okay with this,' but they would always call and be okay," he said. Stone is the second actor to take on the role of de Vil for the big screen after Glenn Close played her in the 1996 '101 Dalmatians' adaptation and its 2000 sequel '102 Dalmatians'. 'Cruella' also stars Oscar-winning actor Emma Thompson. It is set to stream on Disney+ Hotstar on August 27.